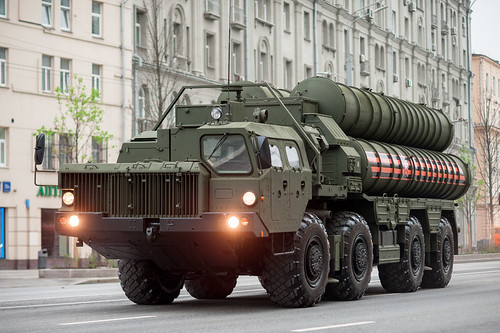 "We will begin delivery of the S-400s to Turkey within two months," Rostec CEO Sergey Chemezov announced on Friday (June 7) during the St. Petersburg International Economic Forum (SPIEF). He noted that the agreement was already entering the final stages, and that Turkey had made all of the payments on time.

Chemezov was also quoted by RT as saying that Russia had already finished training Turkish specialists to operate the advanced long-range surface-to-air missile system, a sign that the deal is close to completion, despite Washington's strong opposition.

Tensions have been high between Turkey and the US as the NATO allies diverged over the arms sale. Having made every effort to block the deal, the US has reportedly now even decided to stop accepting new Turkish pilots for its F-35 training program, Reuters reported, citing officials.

Last week, the US warned that the purchase might have "devastating" consequences, both for the F-35 training program, and for Turkey's future in the NATO.

Citing officials, Reuters news agency has reported that the US has decided to stop accepting new pilots as part of the training program with Turkey. Currently, four pilots and 47 personnel are undergoing training at Luke Air Force Base in Arizona, where they are taught how to maintain and steer the fifth-generation jets.

It was reported last week that the US was "seriously considering" suspending all training for the Turkish servicemen as Ankara sticks to its $2.5-billion deal with Moscow, paying little heed to Washington's ultimatums.

Acting US Defense Secretary Patrick Shanahan said last week that the US would prefer to settle the differences between the "strategic partners" through negotiations, rather than just send its pilots back in a tit-for-tat response.

Turkey offered to a with the US to try to reach a compromise, but Washington has made it clear it wants Ankara to buy American Patriot systems instead of Russian systems. Turkey has insisted it's choosing what is better for its national defense, and the US' 'consolation' offer is no match for the Russian one.

Ankara has said time and again that the S-400 purchase is a done deal, and has not relented in the face of American threats to exclude it from the F-35 program, which has already cost Turkey over $1 billion. The deal between Russia and Turkey was struck in 2017, and the first battery may be delivered as early as this summer.

Washington argues that the S-400 systems pose a security threat to NATO infrastructure and its interoperability with Turkey. Moreover, they will supposedly compromise the security of the F-35s should Turkey get its hands on the jets.

Turkey says no turning back on missile deal with Russia

Turkish President Recep Tayyip Erdogan says his country would not step back from an S-400 missile deal with Russia - again defying US threats.

"There is an agreement. We have determination. It is out of the question to take a step back from it," Erdogan told reporters in Istanbul on Tuesday (June 4). He also said an offer from the United States to sell Patriot missiles to Turkey was not as good as the Russian offer.

Turkey plans to buy 100 US F-35s and some Turkish pilots have already started training with counterparts in the United States.

Author and journalist. Author of Islamic Pakistan: Illusions & Reality; Islam in the Post-Cold War Era; Islam & Modernism; Islam & Muslims in the Post-9/11 America. Currently working as free lance journalist. Executive Editor of American (more...)
Related Topic(s): India; NATO; Patriot Batteries; Russia And Turkey; Russia’s S-400 Missiles; Technology; Weapons, Add Tags
Add to My Group(s)
Go To Commenting
The views expressed herein are the sole responsibility of the author and do not necessarily reflect those of this website or its editors.