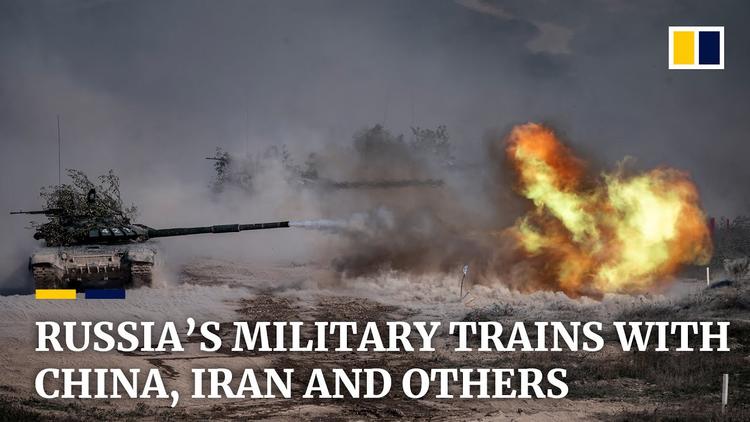 This week, Russia is deploying 80,000 personnel, including 12,000 troops, alongside 1,000 troops from friendly countries in its region, in its Caucasus 2020 (Kavkaz 2020) military drills. Its partners include Iran, China, Belarus, Armenia, Pakistan, and Myanmar.

The choice of Iran was deliberate. The Trump administration has threatened the most severe sanctions imaginable against any country that cooperates militarily with Iran or sells it arms.

While no one is saying so openly, Trump is crazy enough to deploy the US Navy against Russian vessels in the Gulf suspected of supplying arms to Iran. The Russo-Iranian military drills were in part about how to respond to such a US attack.

"According to the defence ministry, up to 250 tanks and around 450 infantry combat vehicles and armoured personnel carriers are taking part in the drills along with artillery systems and rocket launchers. The Russian forces will test the TOS-2 heavy flamethrower systems ..."

Russia's Ministry of Defense announced that the Iranian navy took part, providing cover to the landing of Russian infantry on the coast of Russia's Dagestan province in the Caucasus:

"Two ships of the Iranian Navy provided support to Russian marines during the training of an episode of landing troops on the unequipped coast near Zelenomorsk in Dagestan at the maneuvers "Kavkaz."

"A detachment of warships of the Islamic Republic of Iran's Navy consisting of the 'Joshan' and 'Paykan' missile boats together with the 'Tatarstan,' 'Astrakhan' and 'Ustyug' missile ships provided cover for the tactical amphibious forces," said Rear Admiral Nikolai Yakubovsky, chief of staff of the Caspian flotilla.

"According to the scenario of the exercise, the ship group of the Caspian flotilla of the Russian Navy and a detachment of warships of the Iranian Navy defeated the ships of the mock enemy. 'Tatarstan,' 'Ustyug,' 'Astrakhan,' 'Joshan' and 'Paykan' at the same time performed live artillery firing at surface targets.

"As part of the maneuvers, 'Kavkaz-2020,' a joint Russian-Iranian ship group will also perform tasks to protect sea communications and counteract mock terrorists in the Caspian sea."

As for cooperating with Iran, the United Nations Security Council had initiated an arms embargo on Iran in 2007, but those sanctions will be lifted on October 18 as part of the 2015 Iran nuclear deal, signed by all the permanent members of the UNSC, plus Germany.

Trump breached the treaty in May, 2018, and now insists that it is null and void for all the countries of the world. The UN Security Council and its constituent nations beg to differ.

Iranian foreign minister Javad Zarif flew to Moscow yesterday for consultations with his Russian counterpart, Sergei Lavrov. The latter said of the Trump threats of heavy sanctions for arms deals with Iran, according to Interax,

"Russia will by no means base its policy on taking into account these aggressive, illegal demands, which have no legal force. I hope that other countries, which cooperate with Iran, will also take a principled stance and be guided by their national interests rather than the need to obey the diktat from across the ocean."

He pledged bilateral cooperation with Iran even so, according to Tass, and said, "To our great regret, tensions are being raised around the JCPOA ...Our American colleagues are trying to promote illegal and unacceptable unilateral ideas that the UN Security Council does not support."

Zarif for his part underlined the historic closeness of Moscow and Tehran, according to Farsnews: "Relations between the two countries are being pursued with great seriousness under the direct supervision of their Presidents. I can boldly say that in the history of relations between the two countries, there has never been such serious, close and strategic relationship."

Related Topic(s): Iran; Russia; Russia And China; Sanctions; Trump And Iran; Trump Russia Connection, Add Tags
Add to My Group(s)
Go To Commenting
The views expressed herein are the sole responsibility of the author and do not necessarily reflect those of this website or its editors.