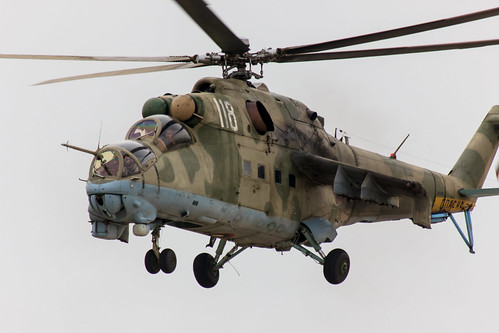 The Russian Minister was joined in the discussion by the Indian Minister of State for Foreign Affairs Gen VK Singh and the former Afghanistan President Hamid Karzai.

It is believed that Pakistan Army Aviation Corps (PAAC) had recently received four Russian-made Mi-35M attack helicopters. Two years ago, Russia had lifted an embargo on supplying weapons and military hardware to Pakistan.

In August 2015, Pakistan and Russia signed a landmark defense deal that includes the sale of four Mi-35 attack helicopters to Pakistan.

"Russia and Pakistan have lately been working on enhancing defense cooperation and are believed to have already covered a lot of ground. Exchange of visits by military commanders in recent years is an indication of progress achieved in this regard. India's decision to enter into tighter embrace with the US had prompted Russia to rethink its defense relationship with Pakistan."

A leading Russian defense commentator, Pavel Felgenhauer, was quoted as saying that the lifting of the embargo that had been in force since the Soviet era marked a sea change in Russian policy on arms sales, which until now have been focused on India amid difficult relations between New Delhi and Islamabad.

"This is an important, key change in Russian policy in the region," he told AFP. "The sale of arms to Pakistan will abruptly worsen our relations with India, the main buyer of our arms... This risks dismantling our cooperation with India," Felgenhauer said.

Meanwhile, the Russian state media reported in February 2017 that the Pakistan military is now purportedly considering purchasing a number of S-400 units as well.

"Russia has good tanks, helicopters, electronic equipment, air defense systems that Pakistan may consider. S-400 is a big ticket number and it will all depend on our budget," a high ranking Pakistani military official told Sputnik News, the foreign language arm of Russian news agency RIA Novosti.

The Japanese magazine, the Diplomat reported last year that Russia lifted a longstanding arms embargo against Pakistan in 2014 and has been seeking closer defense ties with Islamabad ever since.

"This has been accelerated by India's burgeoning defense relationship with the United States and the Russian defense industry's loss of market share in India, although Moscow remains by far New Delhi's biggest military hardware supplier overall," the Diplomat concluded.

Author and journalist. Author of Islamic Pakistan: Illusions & Reality; Islam in the Post-Cold War Era; Islam & Modernism; Islam & Muslims in the Post-9/11 America. Currently working as free lance journalist. Executive Editor of American (more...)
Related Topic(s): Afghanistan; Obama; Pakistan; Russia; Russian S-300 Air-defense Missiles; Sputnik; Taliban, Add Tags
Add to My Group(s)
Go To Commenting
The views expressed herein are the sole responsibility of the author and do not necessarily reflect those of this website or its editors.