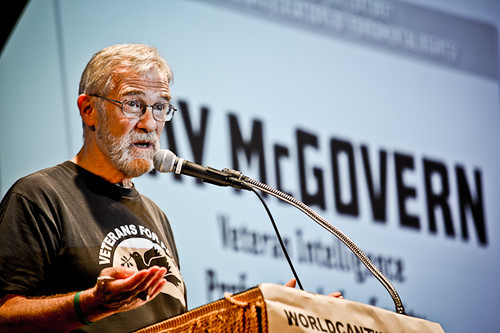 On Wednesday I addressed the latest episode of Russia-gate with Aaron Mate of "Push Back".

The walking-wounded Russia-gate limps along -- witness how many former functionaries will still sign on to anything Clapper/Brennan sponsor and give it to a hungry Establishment media to regurgitate.

It was a relaxed, free-wheeling interview. A lot of ground can be covered in 40 minutes when your interviewer is as sharp, objective, and well informed as Aaron. We dissected the lame claim by Clapper, Brennan, and other ex-intelligence officials that the information on Hunter's hard drive "has all the classic earmarks of a Russian information operation." ( See: Click Here .)

How odd. Both the Director of National Intelligence and the FBI were quick to point out that they have zero evidence of that. Clapper, Brennan & Associates, Adam Schiff, and the NY Times are still making stuff up. And Trump lacks the guts to face them down.

Not to worry. Former CIA Deputy Director John McLaughlin tells us we should be grateful; in his inimitable words: "Thank God for the Deep State."

Ray McGovern works with Tell the Word, the publishing arm of the ecumenical Church of the Saviour in inner-city Washington. He was an Army infantry/intelligence officer and then a CIA analyst for 27 years, and is now on the Steering Group of Veteran Intelligence Professionals for Sanity (VIPS). His (more...)
Related Topic(s): Media; Russia-gate; Trump, Add Tags
Add to My Group(s)
Go To Commenting
The views expressed herein are the sole responsibility of the author and do not necessarily reflect those of this website or its editors.