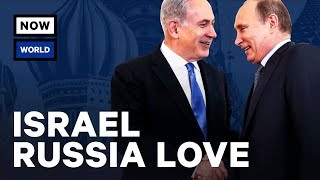 Russia and Israel should be enemies, but instead they're close and complimentary allies.
(Image by YouTube, Channel: NowThis World)   Details   DMCA
>

Defending the latest round of US/Israeli aggression against Syria, US State Department spokesperson Heather Nauert struck a Hitlerian note when she blamed Syria and Iran for an act of overt Israeli aggression, saying "The United States ... strongly supports Israel's sovereign right to defend itself," and when she lied that "Iran's malign activities" and "calculated escalation of threat and its ambition to project its power and dominance places all people in the region at risk."

Adolf Hitler covered his "projection of power and dominance" and his invasion of Poland with the same blatant lies that Washington and Israel use to cover their aggressions. Hitler claimed that Polish forces had crossed the frontier and attacked Germany. That is the excuse used by Israel and its puppets in the White House and Pentagon that blames Iran for Israel's attack on Syria. When Washington and Israel are shameless in their lies, why does Russia think they are "partners" with whom agreements can be reached?

Eric Zuesse notes that only Syria and Russia complain about Washington's illegal occupation of Syrian territory, an occupation that has no UN authorization and is a complete and total violation of international law, and Israel's continual attacks on Syria. Washington's continuing support for war against the legitimate government of Syria and support for Israeli and terrorist attacks on Syrian and Russian forces are undermining Russia's efforts to bring peace to the region. Zuesse also notes that Washington and its UK puppet block all UN action against Washington's illegality.

Zuesse is correct. But is the continuation of Washington's campaign against Syria and Russia largely the fault of Russia? Stephen Lendman makes a case that it is Russia's fault.

Why? It appears to be the case that the Russian government is so anxious for Western approval that it ends its successful military campaigns before the job is finished. It was Putin himself who declared "victory" in Syria and withdrew some of the Russian military before clearing all of Syria of foreign and jihadist occupation, thus leaving in place US beachheads for renewing the conflict.

It couldn't have taken more than two more weeks for Russia and Syria to liberate all of Syria from the US backed jihadists, but apparently Russia was afraid to annoy Washington that much and to risk contact with US personnel, even though Russia is in Syria legally under international law and the US is present illegally.

Again trusting to international law, the UN, and "our Western partners," Russia quit prematurely. As Lendman says, the complaints by Zakharova, Lavrov, Russian Defense Ministry spokesman, and Putin himself are based in absolute fact. But the question is, when will Russia learn, if ever, that facts and law make no difference whatsoever to Washington? Washington's interest is in its hegemony over the world and in Israel's hegemony in the Middle East.

Lendman makes the point that "As long as Russia maintains the myth of partnership with Washington instead of giving Washington a taste of its own medicine ... conflict will likely continue escalating."

Lendman might be correct, judging by the reported heavy Israeli attacks on Syria on February 10 after Syrian air defences damaged Israel's image of invincibility by shooting down one of Israel's US-supplied war planes that was attacking Syria and reports that the conflict might be escalating and involving Iran. RT reports that the Kremlin is worried that the de-escalation zones are threatened and that Putin got on the telephone with Netanyahu urging restraint.

All of my life US presidents have been urging restraint on Israel to no effect whatsoever. Putin's urges will have no more effect, unless Putin takes the card from Lendman's playbook and tells the war criminal Netanyahu who heads the illegal Israeli state, which is based on land stolen at bayonet point from Palestinians, that any more of this and Russia will take Israel out. Lendman thinks that no other way of talking to the crazed zionist state, or to Washington, will have any effect, and history seems to be on Lendman's side. See here and and here.

Either Russia is unsure of its power or Putin is prevented from using Russia's power by the treasonous Atlanticist Integrationists who constitute Washington's Fifth Column inside the Russian government and economy. It is a mystery why Putin tolerates a small handful of traitors who have minimal public support while the West and Israel become daily more aggressive against Russian national interests.

Putin sensibly avoids escalating a situation, but one gets the impression that there are constraints on Putin's ability to stand up to Washington. The Saker identifies the problem as the pro-Washington "Atlanticist Integrationists" who for personal career reasons, personal business reasons, and because they are supported by Washington-financed NGOs and media inside Russia, have sold out Russian sovereignty to globalism. Putin, apparently, is unwilling or unable to move aside those who serve as Washington's check on Russian nationalism, which prevents any real Russian victory.

If the "Atlanticist Integrationists" inside Putin's government are able to block more decisive responses, the question arises: how powerful, really, is Putin? Did Putin win Syria only to lose it to Washington and the Israelis? How can we imagine Putin, the head of a powerful state, on the telephone pleading with an Israeli war criminal who heads a tiny state? We know that Israel owns Washington, but does Israel own Russia also?

How many times did Putin announce victory in Syria, pull out, and then have to go back after Washington's forces had recuperated? Why does Putin refuse the reincorporation of the breakaway Russian provinces in Ukraine? He allowed Crimea back in because of the Russian naval base, but he has refused the Russian provinces of Donetsk and Luhansk. Consequently, the Russian people in these provinces continue to be subject to attack, and Washington has now armed its Ukrainian nazi state with weapons to reconquer the breakaway republics.

Related Topic(s): Allies; Israel; Neoconservatives; Russia And Us Conflict; Russia Bashing; Syria; Vladimir Putin, Add Tags
Add to My Group(s)
Go To Commenting
The views expressed herein are the sole responsibility of the author and do not necessarily reflect those of this website or its editors.