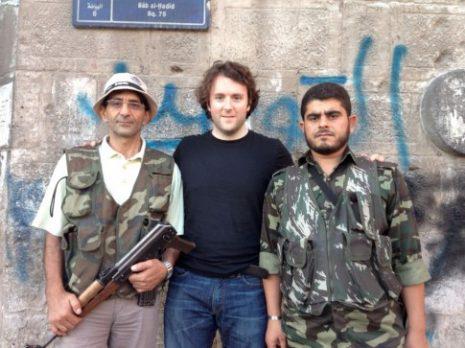 Aleppo, 2012 Michael Weiss with those lovable Syrian Jihadists. He's the one in the middle.
(Image by Posted to Harry's Place)   Details   DMCA

Michael Weiss is a name you may have luckily avoided. I had until recently, not interested in the propaganda from The Daily Beast , a deceptive corporate deep-state clearinghouse. From the start of the Syrian proxy war, Weiss has banged the drum for more weapons to the "rebels" there. He even traveled to rebel-held Aleppo to be photographed with Jihadists and to sell their image to his gullible American readers. That's strike one for Weiss.

" It might have seemed strange for Weiss, a right-leaning political operative who had worked with hardcore Islamophobes like Pam Geller and Douglas Murray, to suddenly be seen in the middle of a war zone palling around with Islamist guerillas. But the war in Syria had created strange bedfellows."

That's an understatement. While writing this piece, Gadi Eisenkot, the head of the Israeli Defense Force, admitted to arming a dozen different Syrian rebel groups and even paying them salaries of $75 per man per month to attack the government forces there. We also know that a little-known state department memo unearthed in Hillary Clinton's emails detailed how destroying Syria was in Israel's interest.

Michael Weiss has a track record of writing articles like: "Why Arming the Rebels Isn't Enough - We need to dismantle Assad's air capability to really give the opposition a leg up" (June 2013). That is straight-up war propaganda urging America to commit war crimes against a sovereign nation, which never attacked us. This is a Crime Against the Peace and a blatant breach of the UN Charter. It's also what the Nazis were hung for at the Nuremberg Tribunals.

Just how much promoting terrorists should a "journalist" be given a free pass for, before he is considered problematic? 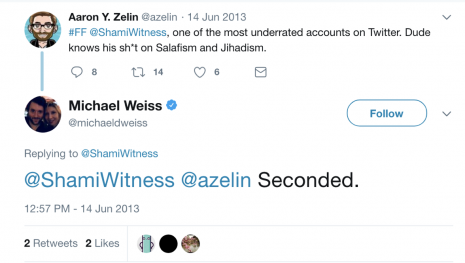