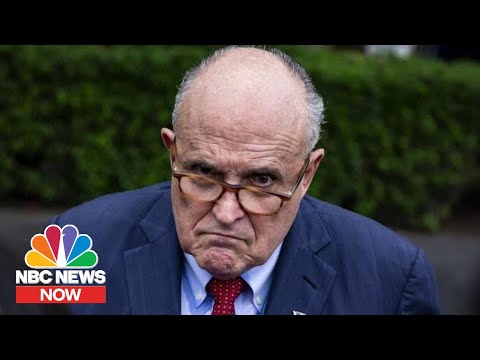 Trump's Relationship With Rudy Giuliani
(Image by YouTube, Channel: NBC News)   Details   DMCA
Neither Hawk, Nor Dove, But Vulture He

Imagine, just for the sake of argument, that the president of the United States was an arrogant, information-challenged, would-be autocrat with a soft spot for authoritarian leaders from China, Russia, and North Korea to Egypt ("my favorite dictator"), Saudi Arabia, and Turkey. And then, suppose that very president, while hollowing out the State Department and slamming its diplomats as "Deep State" troublemakers, were to name a voluble wheeler-dealer attorney as his unofficial, freelance White House go-between with shady characters worldwide. Imagine further that the president would do an end run around the professionals of the U.S. intelligence community -- more Deep Staters, natch -- and rely instead on conspiracy theories trundled back to Washington in that attorney's briefcase.

Now, one last unimaginable thing, but humor me: accept that the attorney in question went by the name of Rudy Giuliani.

That, of course, is a reasonable description of the state of America in 2020. Three-plus years into Donald Trump's misshapen presidency, as the "adults" fled the room one by one or were pushed to the exits, the president was left with a rump collection of family loyalists and third-tier yes-people around him.

Rarely, if ever, do mainstream media types take a step back to survey the classic Star Wars bar-like crew of know-nothings, Bible-thumpers, and connivers who've been assembled as Trump's "team" and their breathtaking incompetence and perfidy. Luckily, with Giuliani in the mix, there's at least one figure so wildly over the top that analysts and pundits have heaped scorn or ridicule on his head, and often his alone, as a person so outrageously unfit, so borderline deranged, so nakedly in it for profit that it's impossible to consider him without marveling at the tragicomedy of it all.

Since 2017, however, Rudy Giuliani has emerged as Trump's shadow secretary of state with his hands in American foreign policy and politics from Iran to Russia, Turkey to Ukraine and beyond. That means anyone, anywhere in the world, with a few million bucks to proffer and an angle to pursue in Washington can avoid Secretary of State Mike Pompeo, the Christian-right uber-hawk from Kansas, and sidle up instead to the former U.S. attorney from the Southern District of New York and mayor of New York City.

During most of 2019, as is well known to anyone who even casually followed the impeachment proceedings in Congress, Giuliani had a starring role in President Trump's conspiracy-laden efforts to prove that Ukraine, not Russia, intervened in the 2016 election and that Joe Biden and his son, Hunter, were mixed up in something nefarious there. (To those in the reality-based world, of course, it was Russia, not Ukraine that meddled massively in 2016. And the Bidens, it's clear, did nothing illegal in Kyiv.)

As we shall see, the Trump-Giuliani conspiracy theory about that country originated with, and was "fertilized" by three individuals who'd earlier been caught up in Robert Mueller's special counsel investigation of the White House: Lieutenant General Michael Flynn, the disgraced former national security adviser in the White House; Paul Manafort, who chaired Trump's election campaign; and Manafort's Ukraine partner and ally, an apparent operative for Russia's GRU intelligence service, Konstantin Kilimnik. In other words, the Trump-Giuliani Ukraine adventure did indeed get a boost from Vladimir Putin's secret service and Moscow's propaganda machine.

You'll remember, perhaps, or maybe you've forgotten, that before Mike Pompeo was secretary of state, before his predecessor Rex ("Rexxon") Tillerson even took the job, it looked for a while like Giuliani was going to get it. He and Donald Trump had been political friends-with-benefits since the mid-1990s, as evidenced by a cringe-worthy 2000 video of Trump placing his lips unbidden on Giuliani-in-drag's "breast." The former mayor had quietly sought to reposition himself as the reincarnation of Roy Cohn, the mob-connected lawyer who had been a mentor to the up-and-coming New York real estate tycoon. ("Where's my Roy Cohn?") It's hardly surprising then that, following Trump's surprise victory in November 2016, Giuliani began lobbying hard for the secretary of state job. At the same time, he was fervently urging the president-elect not to select never-Trumper Mitt Romney for it. (Giuliani did, however, also endorse John Bolton, Washington's warmonger-in-chief, for the job.)

Back in 2016, a week or so after the election, a New York Times editorial drily noted that the appointment of Giuliani as secretary of state "would be a dismal and potentially disastrous choice," that he lacked "any substantive diplomatic experience and has demonstrated poor judgment throughout his career," appeared "unhinged," and would come with a "flurry of potential conflicts of interest." And keep in mind that, back then, Giuliani was only getting started.

In recent years, much has been written, and accurately so, about the exodus of veteran diplomats -- ambassadors to toilers in the ranks -- from a gutted Foggy Bottom and its global outposts under both Tillerson and Pompeo. Writing last October for Foreign Affairs, for instance, former diplomat William Burns noted that fewer people took the department's entrance exam in 2019 than in any year in previous decades. "Career diplomats," wrote Burns, "are sidelined, with only one of 28 assistant secretary-rank positions filled by a Foreign Service officer, and more ambassadorships going to political appointees in this administration than in any in recent history." He added: "One-fifth of ambassadorships remain unfilled, including critical posts."

At the State Department, as one ambassador told the Hill, morale "is at a new low, although I am not sure it could fall much lower than where it has been for the past three years." And that decline only accelerated after the humiliating dismissal of the U.S. ambassador in Kyiv, Marie Yovanovitch, whose ouster was orchestrated by Giuliani.

To be sure, the State Department was never a progressive bastion, not during the Cold War years nor in the era when America was the global hyperpower. It is, nonetheless, the main vehicle for any president wishing to use the levers of diplomacy rather than the oft-chosen military option. Now, with the adults gone and the diplomats increasingly neutered, we're left with Trump and Giuliani. Neither hawks nor doves, they're vultures, viewing every country as part of a vast veldt where they can pick at carcasses of every sort for their own business or political gain.

Related Topic(s): Conspiracy; Coup; Politics; Rudy Guiliani; Trump; Ukraine, Add Tags
Add to My Group(s)
Go To Commenting
The views expressed herein are the sole responsibility of the author and do not necessarily reflect those of this website or its editors.