Cross-posted with extensive appendices at www.justice-integrity.org

Rove falsely told the Fox News audience that Bauer represented Simpson when she alleged in 2007 that former Alabama Gov. Don Siegelman was framed by the Bush Justice Department. In fact, Bauer's name never previously surfaced in arguably the most prominent and notorious federal domestic prosecution of the decade. Rove is shown above in his official photo as a Bush White House senior advisor from 2001 to 2007.

Simpson, portrayed below in a 2008 CBS 60 Minutes show, denies she ever met Bauer, much less hired him.

Fox "On the Record" interviewer Greta Van Susteren listened without challenge as Rove repeated his lies about Simpson, Bauer and Siegelman. Rove was responding to her question on whether the GOP-oriented Crossroads GPS deserves tax-exempt status. The group has overlapping leadership with American Crossroads, which Rove co-founded. 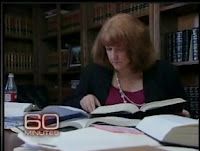 
The falsity of Rove's statements regarding the Siegelman case is obvious to those who have followed it and similar abusive prosecutions by the Justice Department nationwide stemming from the unprecedented political purge in 2006 of nine of the nation's 93 U.S. attorneys. The specifics are below in a transcript of Rove's Fox interview, augmented by the commentary of Alabama journalist Glynn Wilson, a pioneering reporter on the scandals.

Rove's motives are even more intriguing at this point than the specifics of his false statements regarding Siegelman's prosecution, which the U.S. Supreme Court this month affirmed with no appellate review of Rove's reputed role. Siegelman is scheduled for resentencing Aug. 3 on corruption charges.

Rove's untruthfulness this week seems far from irrational. He could land in trouble if subjected for the first time to a thorough investigation. His peace of mind on June 20, the day of his Fox interview, could not have been helped by a protest march that day by attendees of the annual Campaign For America's Future convention. They marched to the U.S. Chamber of Commerce offices to demand that federal authorities arrest Rove. The protest was symbolic, with no charges specified.

In a similar vein, Rove critics active in the blogo-sphere have been claiming over the past week that one of Rove's colleagues is an ex-con who might be outed soon in a sex scandal. This is part of the ongoing back-and-forth war of nerves that political activists wage continually against one another, with lawsuits and claims of outrage by each side.

In this context, it made sense for Rove to deflect attacks by claiming to Fox listeners that he has been cleared from any suspicions by previous investigations -- and that critics are partisans allied unfairly against him.

The full story of the Siegelman case involves, in my opinion, financial, legal, national security, sex, drug and political scandals implicating many high-level officials. Among the latest developments are claims against Siegelman's judge by his estranged wife. She alleges adultery and other misconduct in a case being kept secret from the public under what appears to be an unstated but important legal principle decisive in the circuit court of Montgomery, Alabama: that judges are above the law, and not subject to ordinary scrutiny during litigation.

The full story of this 13-year prosecution is too long to describe with all detail in today's column, even with links pointing to the supporting evidence we have previously published.

So, my focus today is on Rove's attack, which partly overlaps with my work as a Washington-based attorney and investigative reporter. In September 2007, for example, I met Simpson and her Alabama-based attorney Priscilla Black Duncan when they came to Washington for Simpson's testimony before House Judiciary Committee staff. I knew enough about her civic crusade to warn that authorities and journalists alike tend to abuse whistle-blowers. That proved true for her, as for many others in the Siegelman case.