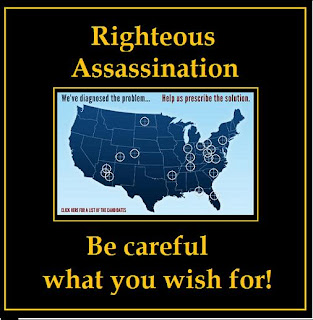 "They've got to realize there are consequences to that," she said. "The rhetoric is incredibly heated." (- Rep. Gabrielle Giffords ' remarks about Palin's mailer after vandals attacked her office in March.)

Rotten Rhetoric: it's protected by free speech, it's guilt free, and can bring out the creative evil in anyone. It can also kill people through righteous assassination. And so many people have used it in history: Pope Urban II used it to spur on the Crusades; Hitler used it for political purposes; Father Charles Caughlin used it in this broadcasts. And today: Ahmadinejad uses it; Osama Bin Laden uses it; Glenn Beck uses it; Bill O'Reilly uses it. Repent Amarillo uses it. Lou Engle uses it.

And now we know that Sarah Palin uses it.

Ok, EVERYBODY uses it. So why is America just waking up to its very real consequences? Are we just now looking at the deleterious effects of popularity and position? Or have we become so totally bombarded with the bloviations of power and celebrity that we only skim the barest buzzwords and pay no attention to other meanings? Sarah Palin's little map with target sites says different things to different people, but with her one-track mind, Palin didn't care if anyone drew different conclusions. She probably thought she was being clever (fat chance) or folksy (better). She aimed for a metaphor of political annihilation which could have resulted in actual annihilation.

This country's Rotten Rhetoric has got to be toned down. What we say has become second to how we say it: impact has become more dependent on imagery than meaning. The steam-roller effect of the imagery, however, has gotten totally out of control and to rein it in will take a massive effort on our part. It will take a major pushback against people like Palin who will slough off situations like the Giffords shooting.

And the sloughing off and pious distancing has already started: "tragic" - "sickened" - "horrified" are starting to pump out of people like blood from a bullet wound. Get used to them for the next several days, because they'll be coming ad nauseum from people who vilified Giffords in no uncertain terms.

"My sincere condolences are offered to the family of Rep. Gabrielle Giffords and the other victims of today's tragic shooting in Arizona. On behalf of Todd and my family, we all pray for the victims and their families, and for peace and justice."

"I am horrified by the violent attack on Representative Gabrielle Giffords and many other innocent people by a wicked person who has no sense of justice or compassion. I pray for Gabby and the other victims, and for the repose of the souls of the dead and comfort for their families.

BFD. Words: they can't heal as much as they can hurt. Politicians know that.

So what can we do to tone down the rhetoric? Boycott Glenn Beck's sponsors?  Bombard Sarah Palin with vicious tweets of our own? Unfortunately, we're caught in a free speech conundrum: by telling people to tone down their Rotten Rhetoric, we're committing an act of censorship. And waiting for political suicide to set in could be a very long time, since people like Beck and Palin are never truly erased from public discourse. The solution may involve education and creativity: somehow we must make civil discourse look totally cool and Rotten Rhetoric look totally stupid. Ironically, we may have to use the Giffords shooting to shock people with lampoon and laughter, reminding people like Palin that Rotten Rhetoric is a two-edged sword, resulting in political suicide.

So SNL, what's keeping you? 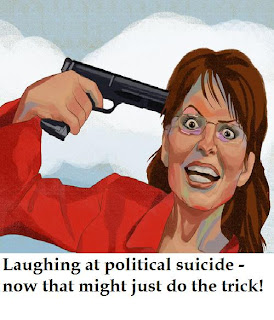 Rev. Dan Vojir is has been writing/blogging on religion and politics for the better part of ten years. A former radio talk show host (Strictly Books " Talk America Radio Network) and book publisher, Dan has connected with some of the most (more...)
Related Topic(s): Giffords-Gabrielle; Righteous Assassination; Sarah Palin; Shootings, Add Tags
Add to My Group(s)
Go To Commenting
The views expressed herein are the sole responsibility of the author and do not necessarily reflect those of this website or its editors.