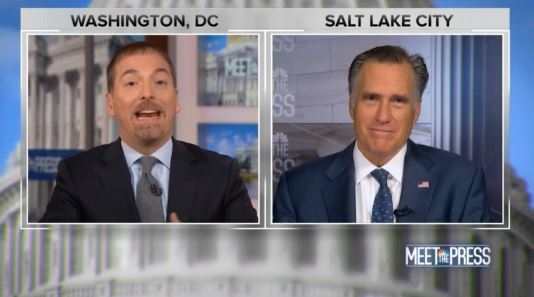 I am convinced that it is not only being wards of the Plutocracy that causes mainst+-ream media talking heads like Chuck Todd to allow the misinformation. There is a level of wanting to ingratiate with these people of power that may also be causal.

In the short interview, Todd allowed a lie, a spin, and a moral failure to go unchallenged. Ironically in the one with Mayor Pete before the Romney interview, he was holding the mayor to account for every word.

The Utah voters voted for the Medicaid expansion to the Affordable Care Act. Their legislature is attempting to obstruct the people's vote b y getting waivers to be less generous. Romney gave the impression that the only issue was Utah wanted the ability to opt-out if the Federal Government did not fund their share of the program. That was a false statement. But there was a moral component that Chuck Todd did not follow up on at all. In effect, Romney was antiseptic in talking about the health of the people in his state. He just made it a cost issue instead of a human issue and Todd never call him on it.

There is no doubt that any average listener of that interview left much more misinformed than had they not watched it at all. And that is a shame, especially in these times. Our mainstream media is to blame for much of the failings in the body politic.

Chuck Todd is a good barometer of how mainstream press covers (or not) national and international events. Based on the pros vs. cons of his reporting, it isn't all that good. And that is why as many of us as possible must become the new-media or assist in keeping a vibrant independent media.

Egberto Willies is a political activist, author, political blogger, radio show host, business owner, software developer, web designer, and mechanical engineer in Kingwood, TX. Egberto is an ardent Liberal that believes tolerance is essential. His favorite phrase is "political involvement should be a requirement for citizenship". He believes that we must get away from the current policies that reward those who simply move money/capital and produce nothing tangible for our society. If a change in policy does not occur, America will be no different than many oligarchic societies where a few are able to accumulate wealth while (more...)
Related Topic(s): Medicaid; Misinformation; Romney Lies, Add Tags
Add to My Group(s)
Go To Commenting
The views expressed herein are the sole responsibility of the author and do not necessarily reflect those of this website or its editors.