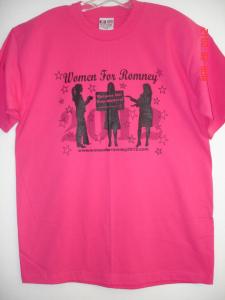 Who are these ladies? These female Romney supporters? Are they so intimidated by our misogynistic society that they would vote for a man who has promised to erode their freedoms, liberties, and privacy rights as soon as he is elected? A man who is so supportive of "traditional" marriage he'd like to see every Mormon, er, I mean man have a wife or three?

Wanna be a Romney Warrior Princess? There's an app for that. Or at least a Twitter hashtag. Check it out for yourself, it's no joke. They have cute tee shirts, too (I'm ordering one in every color).

What makes a Romney Warrior Princess, anyway? Is she armed with a vaginal probe and a portable ultrasound machine?  A backpack full of chains and padlocks and a map to local Planned Parenthood centers? A bottle of aspirin tablets to place between her knees when in the presence of wanton males who are not part of her plural marriage?

"Mitt Romney knows that women matter, and he's earning the women's vote in higher percentages than any other candidate for the Republican nomination," their website proclaims. "Mitt Romney is the candidate who has clearly demonstrated a deep respect for women and the powerful role they play in the home, in business, and in politics. No other candidate has demonstrated anything close to Mitt Romney's unwavering support for women from all walks of life across America. The women's vote matters, but more than that, Mitt Romney knows that women matter," the site continues, without a trace of irony.

Talk about some twisted sisters (wives). Mittens believes women matter all right. Who else would polish the solid gold flatware, home-school the 27 children, and vacuum the car elevator?

"Mitt has demonstrated a deep respect for women ... in business?" Romney won't support the Lilly Ledbetter Fair Pay Act that would mandate equal pay for women for equal work. Right now women earn .77 cents for every dollar a man earns in the same position, and Mittens feels this is just dandy. As governor he vetoed funding for child care centers that helped working moms, and paradoxically proposed work requirements that would force mothers of newborns into the workforce.

And his deep respect for women's rights? Ask Peggie Hayes about that. She's the working single-mother who was instructed by then "Bishop" Romney to give her "bastard" baby up for adoption or risk being excommunicated from the church and going to hell. Love that conservative compassion. His respect for women is so profound he petitioned HHS to make female contraception illegal.

He also cut funding for programs that assisted teen mothers, vetoed funding for breast cancer detection programs, and cut funding to shelters for abused women. Wow, where do I sign up to be a Romney Princess Warrior? Is there going to be a related reality TV show?

There's no Etch-A-Sketch big enough to shake away his shameful record. Who are these deluded women and can't they read? Are they forbidden to research Romney's record for themselves? If elected, Mittens would roll back women's rights faster than you can say clitorectomy.

Kathy never expected a career in radio as a talk show producer. Born and raised in Atlanta, Georgia, Kathy was completing her nursing degree when in 2001 - in an emergency - she was asked to fill in as the producer of Mike's program. Within a few (more...)
Related Topic(s): Mormon; Politics; Republican; Romney Weird Stuff; Romneycare; Women Issues Contraception; Work, Add Tags
Add to My Group(s)
Go To Commenting
The views expressed herein are the sole responsibility of the author and do not necessarily reflect those of this website or its editors.