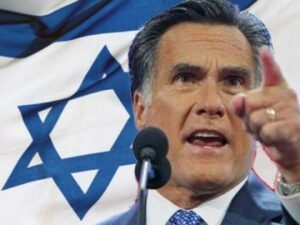 Are all Republican politicians ignorant, or is it only the sons of more successful GOP-politicos who fail miserably when it comes to discussing the issues?

Dubya the Decider was a dialogue disaster, both in his domestic speeches and foreign policy statements. But he may have met his malapropism match in Mittens. Elder Romney successfully pissed off most of the British Isles with his vocal, inappropriate concerns over Great Britain's ability to pull off a successful Summer Games ... but he didn't stop there. He then traveled to Israel to piss off the Palestinians by calling Jerusalem the "capitol of Israel," and then further insulted them by suggesting their territories were poor because of their "culture."

The Christian Science Monitor has the story:

"Mitt Romney wanted to use his trip to Israel to differentiate himself from President Obama, but instead he ended up sounding like Mr. Obama -- the 2008 presidential candidate, that is.

"Governor Romney caused a stir when he said in a speech Sunday that 'it is a deeply moving experience to be in Jerusalem, the capital of Israel.' That actually sounded milder than what then-Sen. Barack Obama said in June 2008, when he insisted that Jerusalem must 'remain the capital of Israel, and it must remain undivided.'

"Romney's statement on Jerusalem was not well received by the Palestinians, but the candidate didn't stop there, adding a comment Monday about culture and prosperity that elicited even more condemnation.

"Aside from angering the Palestinians, the problem with referring to Jerusalem as the capital of Israel is that, officially, the United States -- in line with most of the international community -- does not recognize Jerusalem as Israel's capital. Instead, it considers the city's status an issue to be negotiated between Israelis and Palestinians, who claim East Jerusalem -- seized by Israel in the 1967 war -- as their capital.

"As a result, the US keeps its embassy in Tel Aviv.

"In both cases -- Obama in 2008 and Romney this week -- the candidates backtracked from their statements. In Romney's case, he told CNN after his speech that 'It's long been the policy of our country to ultimately have our embassy in the nation's capital, Jerusalem,' adding that 'I would follow the same policy we have in the past.'

"After his comment in 2008, Obama -- also in an interview with CNN -- said that 'obviously' it would be 'up to the parties to negotiate a range of these issues' and that 'Jerusalem will be part of those negotiations.' He added, however, that a division of the city 'would be very difficult to execute,' and he said he still envisioned 'a system in which everybody has access to the extraordinary religious sites in Old Jerusalem but that Israel has a legitimate claim on that city.'

"Romney's echoing of Obama circa 2008 made it seem as though overstepping US policy on Jerusalem has become established practice for a presidential candidate.

"But before leaving Israel Monday for Poland and the last stop of his three-country trip, Romney made another comment that not only had Palestinians up in arms, but which added one more flat note to the image of the Republican presidential hopeful's gaffe-prone international foray.

"At a breakfast fund-raising event in Jerusalem Monday, Romney said he couldn't help but notice the 'dramatically stark difference in economic vitality' between Israel and 'the areas managed by the Palestinian Authority,' and he concluded, 'Culture makes all the difference.'

"No mention from the would-be US president of the trade and mobility restrictions that Israel maintains over the occupied territories of the West Bank and Gaza -- restrictions that both the World Bank and the International Monetary Fund have said for years are key factors in hampering Palestinian economic growth.

"Palestinian leaders quickly blasted Romney's 'culture' comment as 'racist' and added that he failed to take into account the impact of Israel's tight grip on the Palestinian economy.

"Yet while Romney did not seem interested in answering Palestinian critics, he did seem focused on reaching not just US Jewish voters but also Christian conservatives whose support for the Mormon former Massachusetts governor has been lukewarm.

Kathy never expected a career in radio as a talk show producer. Born and raised in Atlanta, Georgia, Kathy was completing her nursing degree when in 2001 - in an emergency - she was asked to fill in as the producer of Mike's program. Within a few (more...)
Related Topic(s): Israel; Jerusalem; Mitt Romney; Obama; Palestinian; Republican; Speech, Add Tags
Add to My Group(s)
Go To Commenting
The views expressed herein are the sole responsibility of the author and do not necessarily reflect those of this website or its editors.