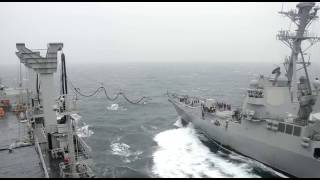 With the world focused on the scary possibility of war on the Korean Peninsula, not many people paid a whole lot of attention to a series of naval exercises this past July in the Malacca Strait, a 550-mile long passage between Sumatra and Malaysia through which pass over 50,000 ships a year. With President Trump and North Korean leader Kim Jong Un exchanging threats and insults, why would the media bother with something innocuously labeled "Malabar 17"?

Malabar 17 brought together the U.S., Japanese, and Indian navies to practice shutting down a waterway through which 80 percent of China's energy supplies travel and to war game closing off the Indian Ocean to Chinese submarines. If Korea keeps you up at night, try imagining the outcome of choking off fuel for the world's second largest economy.

While Korea certainly represents the most acute crisis in Asia, the diplomatic maneuvers behind Malabar 17 may be more dangerous in the long run. The exercise elevates the possibility of a confrontation between China, the U.S. and India, but also between India and Pakistan, two nuclear-armed countries that have fought three wars in the past 70 years.

This tale begins more than a decade and a half ago, when then Under Secretary of Defense for Policy, Douglas Feith -- one of the most hawkish members of the George W. Bush administration -- convened a meeting in May 2002 of the US-India Defense Policy Group and the government of India.

As one of the founding members of the Non-Aligned Movement, India traditionally avoided being pulled into the Cold War between the U.S. and the Soviet Union.

But the Bush administration had a plan for roping India into an alliance aimed at containing China, with a twist on an old diplomatic strategy: no stick, lots of carrots.

Conn M. Hallinan is a columnist for Foreign Policy In Focus, "A Think Tank Without Walls, and an independent journalist. He holds a PhD in Anthropology from the University of California, Berkeley. He oversaw the (more...)
Related Topic(s): China; India; Korea; Nukes; Scary; Uranium; Wars; Weapons, Add Tags
Add to My Group(s)
Go To Commenting
The views expressed herein are the sole responsibility of the author and do not necessarily reflect those of this website or its editors.