Recently Rohn Kenyatta, an astute chronicler of race relations and racism and related matters in the United States and for its history published a column on the pages of OpEdNews which raised ten questions about those matters and related policy issues. In a direct communication with Mr. Kenyatta I posed answers to his ten questions. In this column I am bringing that communication to the whole readership of OpEdNews. Mr. Kenyatta's ten questions, in some cases edited for length by me, are each followed by my responses to each. But first, let me present an edited version of Mr. Kenyatta's own introduction to his list of questions.

Mr. Kenyatta's Introduction to his 10 Questions

"For a number of years, I have sought to confront both white Americans, and Black People in America, with their denial and hypocrisy in matters historic, domestic and international. The purpose of my doing so was an attempt to see if there were patterns in conduct; a pathology. I have tried to do so through different modalities. The shrewder individuals resort to deflection. Deflection is a tactic that imperils the defense for many, many reasons. Most of all it shows evasion and cowardice.

"I'll let you figure it out, should you be so inclined.

"In light of the aforementioned preamble, I have decided to make a more direct challenge to white America and, by default, Western Civilization with specific questions. Frankly, I know what is going to happen but that is what I want you to see. The only rule I have is that you answer all ten questions; no matter your answers, a pattern will emerge. . . . .

"The first five (5) interrogatories are pertinent to domestic policy, the second set relevant to international policy. Two or three of the questions have secondary and tertiary queries."

And now to the 10 Questions and my responses.

Answer # 1. Because as I have written on numerous occasions, the South actually won the Civil War and one of the fruits of their victory was the projection of the Doctrine of White Supremacy over the whole of the country. The fact that an open, proud-of-it racist like Donald J. Trump could be elected President proves the point.

The Charlottesville Terrorist, aka the Pittsburgh Terrorist; aka the El Paso Terrorist, aka White Supremacist-in-Chief.
(Image by Spencer Means)   Details   DMCA

Question # 2. Pursuant to the preceding question, why do you so adamantly, and out of hand, reject reparations to the aforementioned group which you, admittedly, kidnapped, exploited, enslaved, raped, murdered and prospered from?

Answer # 2. I think that reparations are a very good idea, and justified. The major policy questions (not dealing the political questions right now) is whether they should go to individuals, or communities, or both, and beyond African-Americans and Native Americans, to whom else.

Question # 3. Your currency states: "In God We Trust". Your "Pledge of Allegiance" states: "One nation under God". You sing songs about God blessing America. Your Bible states: "Thou shalt not kill". How do you explain the State sanctioned murder of children around the globe (Melanic children in particular) and right here in your own backyard; particularly given your incessant invocations of "God"?

Answer # 3. I am a Secular Jew and an atheist and have written about what that means. The fact is that neither the word "God" nor the word "religion" nor the word "Christian" appear in the Constitution and thus they have no place on the national currency. I have also written (as have many others) about the historical harms done world-wide by "religion," starting with the fact that over the time that there have been wars, more humans have been killed in religion-motivated ones(just one example: on the belt buckle of every Wehrmacht solider was the saying "Gott mit Uns," God with Us) than any other cause.

Question # 4. If you believe as you claim you do, and pursuant to your "Declaration of Independence" that "all men are created equal" how do you reconcile and explain its exclusion of the Blacks that gave this country its wealth and, even to this very day, are subject to a vehement, virulent racism unbeknownst to any other group of "Americans," and institutionalized by you?

Question #5. Thomas Jefferson stated: "Blacks smell bad", "Blacks are ugly", "Blacks suffer less deeply", "whites have flowing hair, a more elegant symmetry of form", "Blacks are inferior to whites in both endowments of body and mind". Abraham Lincoln starkly stated: "I can conceive of no greater calamity than the assimilation of the Negro into our social and political life as our equal", "We can never attain the ideal union our fathers dreamed, with millions of an alien, inferior race among us, whose assimilation is neither possible, nor desirable." I suppose you disagree with the statements of your "forefathers" so, tell me, why do you have monuments, streets, schools and cities named after these moral and spiritual criminals? Further, why do your textbooks leave out these facts; especially regarding child molester and rapist Thomas Jefferson?

Answer #5. Of course, virtually all leaders of all movements, even progressive ones, are flawed in one or more ways. That is all the more reason why the full history of the U.S. should be taught, but will not be for as long as the Doctrine of White Supremacy rules the land. You may have noted that at the beginning of my columns for some months now, as Trump promotes racism as his central raison d'etre, is the statement "Either this nation shall kill racism, or racism shall kill this nation."

Question # 6. Given your proselytizing around the world, and insisting that you are "a nation of laws", how do you explain your total disregard for international law with regard to napalm, cluster bombs, depleted uranium munitions, chemical and biological warheads, targeting of civilians, drone killings as well as kidnapping and torture (let alone your unconditional support of the rogue, criminal, apartheid state of Israel)?

Answer # 6. Two words (obviously NOT a justification, but an explanation): Capitalist imperialism.

Question # 7. When you speak of "American Exceptionalism" is it that "exceptionalism" that allows you to be the only nation in the history of the galaxy to drop nuclear weapons (twice) on civilian targets and arrogantly state, in doing so, that you "saved lives"? And, under what circumstances would it be allowable for some other nation, a non-white nation (which is the vast majority of the world), to use nuclear weapons or "weapons of mass destruction" against you?

Question # 8. Black Lives Matter: why do you treat the European "victims" of the Holocaust differently, much differently, than you do the Holocaust of many more millions that were/are Black who died on their involuntary journey to America or while in America? If His-Story is accurate, the Holocaust involved, roughly, six million Jews; be mindful that Judaism is a religion. This horrific genocide took place in less than a decade; 400 years equals 40 decades, and the Black man, woman and child in America is still being executed, both in and out of concentration camps. Yet, no one has come to save them. No alliances, no homeland taken from others so that they could be coddled and protected, no world war, no nothing. Further, with regard to "the Jews", if they are truly people that were lost without a "homeland" would not the Black Person in America be the greatest example thereof? And what about Black "Jews" (Eritrean and such) why are they treated so differently (let alone the Palestinians) in Israel? Coming full circle, why isn't the Black Lives Matter movement a bunch of liberal white folks? If it were, things would change immediately, don't you think? 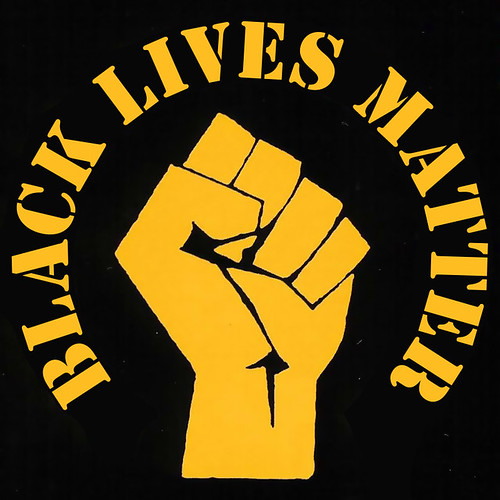 Black Lives Matter. For as long as this nation needs to have movements like this one, that is for how long there will be no social --- or political --- peace here.
(Image by kpper)   Details   DMCA

Answer # 8. The Doctrine of White Supremacy. (By the way, Judaism is a culture as well as a religion, and Jews were slaughtered in the Holocaust because they were Jews, religious or not, not because of their religion. Hitler's anti-Semitism was political anti-Semitism, that is anti-Semitism used for political purposes, which is different from the religious anti-Semitism codified by St. Augustine in the 5th century. The Nazi version was invented by, coincidentally, two Austrians, in the 1880s.) Further, the shooting of unarmed black men by police can be considered the modern equivalent of lynching.

Question # 9. Why are all of the wars that you constantly engage in and seek out, against people of color?

Answer # 9. This is in part a post-World War II development, although for sure the pre-WWII US imperialist wars (e.g., in the Philippines, 1901-04) were against people of color. It has to do with the nature of modern imperialism and what has been available for conquest.

Question # 10. What is it that makes you, unequivocally the most violent, war mongering nation on earth, demand that others not defend themselves against your violence and reciprocate it? Are you "the chosen ones" or are you just better than everybody else and, thusly, your life has more value?

Answer # 10. Capitalist imperialism, taken to its highest form by the Post World War II U.S. capitalist class and its state apparatus. However, an example that lasted for most of the 20th century was "The 75 Years WarAgainst the Soviet Union."

And that brings me to the end of the colloquy between me and Mr. Kenyatta, which hopefully will continue, perhaps on these pages, perhaps elsewhere. Of course, any of our readers are cordially invited to join in.

Steven Jonas, MD, MPH, MS is a Professor Emeritus of Preventive Medicine at StonyBrookMedicine (NY) and author/co-author/editor/co-editor of over 35 books. In addition to his position on OpEdNews as a Ă ‚¬Ĺ"Trusted Author,Ă ‚¬ ť he is a Senior (more...)
Related Topic(s): America; God; History; Hitler; Holocaust; Jews; OpEdNews; Policy; Race; Racism; (more...) Religion; Slavery; Trump; Wars, Add Tags  (less...)
Add to My Group(s)
Go To Commenting
The views expressed herein are the sole responsibility of the author and do not necessarily reflect those of this website or its editors.