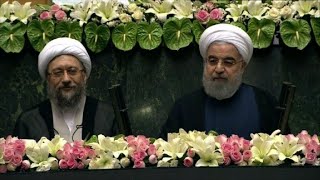 The phalanx of European leaders, ministers, and dignitaries, attending the inauguration of Iranian President Hassan Rouhani last weekend was a stunning snub to Washington. It was also a clear signal the US is losing its thrall over Europe.

Think about it. According to US President Donald Trump and the American Congress, Iran is the world's biggest state sponsor of terrorism. And yet here we saw European leaders respectfully attending the swearing-in of the country's re-elected president. A rather big contradiction, don't you think?

Federica Mogherini, the EU's highest ranking diplomat, was accompanied at the Iranian presidential ceremony by French Foreign Minister Jean-Yves Le Drian and Germany's Minister of State Michael Roth. Also in attendance were ministers and dignitaries from Austria, Britain, Denmark, Italy, and the Netherlands, as well as many other non-European countries.

So, what's all this American talk about Iran being a rogue state, a scourge of global terrorism? The presence of European officials -- and the absence of American ones -- during the inauguration of President Rouhani was a spectacular demonstration of dissonance and repudiation of American policy.

Only a few weeks ago, in May, while President Trump was on his first overseas official visit in Saudi Arabia, he called on all nations of the world to boycott Iran. Trump told assembled Arab leaders then: "All nations of conscience must work together to isolate Iran," accusing the Islamic Republic of threatening Middle East security.

Evidently, European countries have ignored Trump and his demeaning caricature of Iran.

Indeed, ever since the July 2015 signing of the international nuclear accord between Iran and six other world powers (the US, Russia, China, Britain, France, and Germany), European governments and businesses have been hot on the trail to Tehran to ink new joint ventures and investment deals.

The nuclear accord -- known as the Joint Comprehensive Plan of Action (JCPOA) -- has lifted international sanctions on Iran in return for it adhering to restrictions on its nuclear program to bar weaponization. Six reviews carried out by the UN watchdog, the International Atomic Energy Agency, have verified Iran is in full compliance with its side of the JCPOA bargain.

The Europeans seem more than happy about that. Federica Mogherini, the EU foreign affairs chief, is a formidable advocate of the nuclear deal, proclaiming it a success and a source of regional stability. Iran's Foreign Minister Mohammed Javad Zarif was warmly welcomed in Brussels in June when he reported via Twitter: "Excellent meeting with leaders in Berlin, Rome and Paris. Despite reckless US hostility, EU committed to JCPOA and constructive engagement."

European investors have duly piled in to snatch part of the Iranian market of some 80 million people and the world's second and fourth largest source of natural gas and oil, respectively.

This week, two days after Rouhani's inauguration, French automaker Renault signed the "biggest-ever" car deal in Iran, worth 660 million, where it will manufacture 150,000 vehicles a year in partnership with two Iranian firms.

Last year, French company PSA, the maker of Peugeot and Citroen, announced a similar investment in Iran, worth 400 million.

The champion breakthrough for European-Iranian investment came last month when France's Total signed up to a nearly 5 billion 20-year project with Iranian and Chinese firms to develop Iran's South Pars gas field in the Persian Gulf, reckoned to be the world's biggest reserve.

Both Germany and France have seen exports to Iran soar since the implementation of the nuclear accord. Germany's by some 26 percent and France's by nearly 50 percent, according to trade figures.

Related Topic(s): Allies; Energy; Iran; Relationships; Sanctions; Trade, Add Tags
Add to My Group(s)
Go To Commenting
The views expressed herein are the sole responsibility of the author and do not necessarily reflect those of this website or its editors.