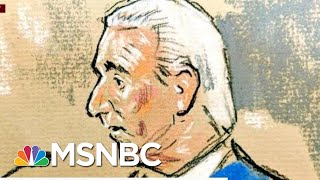 Well, this didn't take long. Roger Stone was issued a gag order last week, which he immediately violated the same day with a tweet, which was then deleted.

Stone was told by Judge Amy Berman Jackson that he could not "talk publicly about the investigation or the case or any of the participants in the investigation or the case. Period." He was also told, "You may send out as many emails, tweets, posts as you choose that say, 'Please donate to the Roger Stone defense fund'...And you may add that you deny or are innocent of the charges, but that's the extent of it."

[this is the portion of Cohen's testimony referred to]

"In July 2016, days before the Democratic convention, I was in Mr. Trump's office when his secretary announced that Roger Stone was on the phone. Mr. Trump put Mr. Stone on the speakerphone. Mr. Stone told Mr. Trump that he had just gotten off the phone with Julian Assange and that Mr. Assange told Mr. Stone that, within a couple of days, there would be a massive dump of emails that would damage Hillary Clinton's campaign. Mr. Trump responded by stating to the effect of 'wouldn't that be great.'"

Stone has denied ever communicating with WikiLeaks about the emails, even though he claimed publicly during the campaign to have been in touch with Assange.

In all events, it looks like the gag order has been violated, twice now. If I've been watching for it like a hawk and found two occasions already, you think this hasn't gotten back to Her Honor? Stone is on some very thin ice.

Related Topic(s): Assange; Roger Stone; Tweet, Add Tags
Add to My Group(s)
Go To Commenting
The views expressed herein are the sole responsibility of the author and do not necessarily reflect those of this website or its editors.