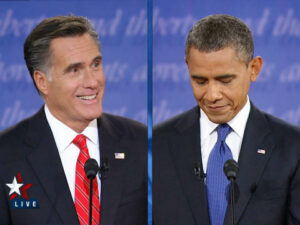 Was the President distracted because of his wedding anniversary?

Was he over-confident from his lead in the polls and didn't believe he had to bring his A-game?

Did he underestimate Mittens' oratorical skills based on his many previous verbal missteps?

Or was he just intimidated because Romney had the bigger flag pin?

Have to admit -- for a minute there I thought Eastwood was right about the empty chair. One thing is for certain, Romney rode that debate like a cowboy on a bucking bronco. He's never been more assertive, impassioned, energized and incredibly fired-up. He almost seemed unnaturally energized, compared to previous appearances. It makes you wonder if his handlers snuck him some of Honey Boo-Boo's "go-go" juice right before the cameras rolled. Nothing like a shot of Red Bull and Mountain Dew to put the bounce in your $1,000 loafers.

In our media-dominated culture it won't matter that Mittens lied about practically everything. All that will be remembered is that he took command of the debate -- intimidated both the President and the moderator -- and seemingly reduced the Commander in Chief of the United States to the point of staring at his belly button. It matters not at all if Obama was taking notes, or sharpening his pencil, or contemplating whether he needed to buy Michelle a different anniversary gift. The effect was that his perpetually downcast gaze made him look like a kid who was getting a (well deserved) verbal spanking from his daddy.

So, Willard's gross distortions of the truth, if heard at all, will not be remembered by the typical American viewer. We expect Romney to lie; it's what he has to do. Snakes bite, hornets sting, Teabaggers whine, and Republicans lie. It's the only way they can win -- and/or steal -- an election. They can't very well come out and tell the truth: "We're going to cut taxes on rich people and big corporations; end your Medicare and Social Security payments; outlaw female contraception; end affirmative action; eliminate the Department of Education; end student loans and grants; stop unemployment compensation; end fair labor laws, worker protections, and unions; remove all environmental protections; overturn Roe vs Wade; pass laws making homosexuality a crime; start wars and replace your science text books with The Bible." No, can't do that.

Only the most rabid Glen Beckified zombies would vote for them if they spoke truthfully about their agenda. So they lie  They have to.

How many times did Mittens repeat Obama wanted to make $716 billion in cuts to Medicare (an amount equal to his own suggested cuts) without even a peep from the President in explaining the difference between the two proposed cuts? But the biggest single disappointment of the evening occurred when Obama meekly mentioned the tax breaks enjoyed by corporations who move their companies overseas to avoid US taxation, and Romney replied: "I've been in business for 25 years. I have no idea what you're talking about. Maybe I need to get a new accountant, but the idea you get a break for shipping jobs overseas, is simply not the case." That took balls. Monster balls.

Uhm, Mittens?  Two words: Bain Capital.  Make that six: Bain Capital, you smug lying hypocrite.  But these are the six words the President should've spoken instead of examining his belt buckle.   When Willard finished ranting and Leher weakly suggested they now move on to Social Security, Obama just said "OK," without circling back to comment on this incredible Mormon-sized whopper.

And so it went, for 90 painful minutes.  Romney leaped and parried and jousted and slashed like a musketeer on crystal meth while Obama could barely hold his head up.

Was the Bigger Flag Pin that intimidating?

The inestimable  Greg Palast had a wonderful deconstruction of last night's debacle. Here's a choice snippet:

"Dear Mr. President: As a journalist I don't take partisan sides, but I do take America's side. And as Commander-in-Chief, you simply cannot fall asleep in the saddle. I mean Commander-in-Chief in the Class War.  The war of the billionaires against the rest of us. You were asked, 'What is the role of government?' You seemed stumped. Lost. Well, here's three, Mr. President:

"I don't care that you couldn't seem to defend yourself tonight, Mr. President. That's a Democratic Party headache. What I resent, what gets me furious and angry, is that you didn't defend ME. Me and my family.

Kathy never expected a career in radio as a talk show producer. Born and raised in Atlanta, Georgia, Kathy was completing her nursing degree when in 2001 - in an emergency - she was asked to fill in as the producer of Mike's program. Within a few (more...)
Related Topic(s): Commander-in-chief; Debate; Democratic; Jobs; Mitt Romney; Obama; Republican, Add Tags
Add to My Group(s)
Go To Commenting
The views expressed herein are the sole responsibility of the author and do not necessarily reflect those of this website or its editors.