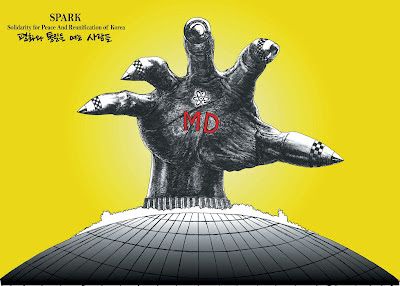 Copyrighted Image? DMCA
Artwork by SPARK by Solidarity for Peace & Reunification of Korea

The self-righteous, hypocritical bullshit is heating up on the US, Japanese, and South Korean side.  Even the United Nations is involved.  They are all once again lecturing and threatening North Korea about launching a rocket into space.  The message is - you are not allowed because you are bad!

Forget the fact that the US launches more military rockets than anyone else in the world.  What right does the US have to say who can - and who can't - launch rockets into space?  Are we king of the world?

How come the US can invade all kinds of countries, lead the world in arms exports, overthrow governments and install puppet governments - and then is allowed to launch all the missiles it wants?  No one says a word about US rocket launches.

The US has no right to tell other nations what they can launch.  As long as the Pentagon has nuclear weapons that can be fired at any moment, and is developing the world's most technologically advanced space warfare system, it has no legitimacy on the subject.

With North Korea declaring its intention to push ahead with a third nuclear test following the United Nations Security Council resolution on its launch of a long-range rocket, it seems hardly a coincidence that the US, China, and Japan have launched their own interceptor missiles and spy satellites. As the intensity of the North Korean nuclear crisis soars and the strategic competition between the US and China, and between China and Japan, heats up in the Asia-Pacific region, military tensions are on the rise in Northeast Asia.....

On Jan. 26 (local time), the US Defense Department announced that it had succeeded in a test of a missile defense system that can intercept intercontinental ballistic missiles (ICBMs) that are aimed at the continental US while they are still outside the atmosphere.....


North Korea is not going to attack anyone.  If they did they'd be buried in conventional and nuclear responses.  North Korea knows it's on the US list of nations to be taken down.  Iraq, Afghanistan, Pakistan, Libya, Yemen, Iran, Syria and North Korea.  The North Koreans can see that the list is getting shorter and shorter.

The US to this very day has not agreed to a peace treaty with North Korea.  After 60 years of an "armistice" the war is officially still on.  ( The definition of armistice : temporary suspension of hostilities by mutual agreement.)

North Korea has to wonder when "temporary" is over?

The people in the US need to stop buying the mafioso bravado from their so-called government.  We are the global bully and nothing changes until the citizens here deal with the fact that our country is, as Martin Luther King so rightly said, "The greatest purveyor of violence in the world today."

It's time to get real.

Related Topic(s): Afghanistan; Hypocrisy; Iran; Korea; Military; Pentagon; Rocket; Rocket Attacks; Satellites; Syria, Add Tags
Add to My Group(s)
Go To Commenting
The views expressed herein are the sole responsibility of the author and do not necessarily reflect those of this website or its editors.