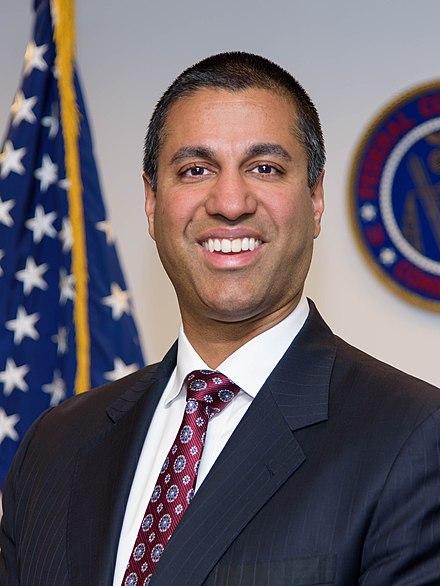 Ajit Pai portrait 2018.
(Image by (From Wikimedia) FCC, Author: FCC)   Details   Source   DMCA
BREAKING NEWS: The Federal Communications Commission voted on Thursday to give wireless carriers like Verizon the green light to block unwanted robocalls automatically for all customers.
"If there is one thing in our country today that unites Republicans and Democrats, liberals and conservatives, socialists and libertarians, vegetarians and carnivores, Ohio State and Michigan fans, it is that they are sick and tired of being bombarded by unwanted robocalls," said FCC Chairman Ajit Pai during the commission's monthly meeting prior to the 5-0 vote to approve the rule. "My message to the American people today is simple: We hear you, and we are on your side."
>>>>>>>>>>>>>>>>>>>>>>>>>>>>>>>>>>>>>>>>>>>>>>>>>>>


The difference is you can swat the fly or mosquito and kill it, but the unseen robot is far away, often in another nation, so you are of course unable to swat them. I don't have caller ID so I can't see who is calling.


Sometimes I have been interrupted in the middle of selling some art by incoming robocalls telling me "this is your last chance to pay off your student loan" (despite never having had one, and that I went to college 50 years ago), or: "we have called repeatedly to let you know your google listing is in danger of being dropped unless it is updated" (when in fact the google listing has been updated just fine as of two years ago). This goes on all day, sometimes 4 or 5 daily from one source, maybe totaling 50 a day.


Thus, when I read this morning's USA Today Opinion piece by Ajit Pai, Chairman of the FCC, I was grateful for some concrete action coming right from the top, right where it should originate from, eh?

I will add just one thing more: that a young lawyer here in Santa Fe has opened a law practice who's principle focus is suing Robocallers for $1500 per call. They offer apologies, but this lawyer says "Keep the apology~~~just cut a cashier's check!"

Those settlements are allowed under an obscure law called "Telephone Privacy Act," something you might never have known even existed.

FCC should block robocalls by default

FCC is trying to stop robocalls. Under the Chairman's new proposal, phone companies won't have to wait before offering protections from robocalls.

,breakquote>If you have a cellphone, you probably love it and hate it. The main reason you hate it is very likely to be robocalls.

If Americans can agree on anything these days, it's that they're fed up with robocalls. The scam calls.The calls from foreign countries at 2 a.m. The deceptive caller ID "spoofing," which happens when a caller falsifies caller ID information to make it look as if they're calling from your area code.

Unwanted robocalls are far and away the top consumer complaint we get each year at the Federal Communications Commission. They're more than 60% of the complaints we receive. And when consumers complain to us, they don't distinguish between illegal calls, scam calls, telemarketing calls and spoofed calls. They simply lump them together under one category: unwanted.

A lot of consumers are understandably frustrated by this. One woman recently told me she felt like robocallers had absconded with her expensive smartphone by bombarding it so frequently with unwanted calls. Another man wrote me asking that the FCC respect the wishes of most Americans by working to stop unwanted robocalls.

Stopping the deluge of unwanted calls is the FCC's top consumer protection priority. That's why I recently proposed to allow such calls to be blocked by default, before they even get to your phone. Call-blocking services are available now, but only if a consumer proactively asks for it or downloads an app.

But under my proposal, which the FCC will vote on Thursday, phone companies won't have to wait before offering these protections. This should greatly increase consumer adoption of these services and help stem the flow of scam robocalls. And, of course, consumers can opt out if they don't want these calls blocked.

We expect phone companies will move quickly to use this tool and help consumers block unwanted robocalls. Among other things, default call-blocking will reduce the costs of handling the robocalls that flood their networks and save them grief by limiting customer complaints

I'll concede that not everyone is happy about my proposal. For example, robocallers, including debt collectors, have asked us to delay our vote. But the Americans whom I hear from want relief from the flood of unwanted robocalls now. They don't want us to wait.

Technology has made it far too cheap and easy to make massive amounts of robocalls. For example, we recently saw "one ring" scam calls flowing into America from countries like Mauritania and Sierra Leone. Scammers unleashed calls in the middle of the night, letting the phone ring just once. They hoped to arouse enough curiosity or sleep-deprived fury from consumers to prompt a callback that they could then bill like a 900-number call. Under my proposal, these types of calls could be stopped before they even get to consumers.

Related Topic(s): Ajit Pai Fcc Chair; FCC; Fed Regulatory Agency FCC; Privacy; Privacy; Privacy; Robocalls May End Thanks To Ajit Pai And Fcc, Add Tags
Add to My Group(s)
Go To Commenting
The views expressed herein are the sole responsibility of the author and do not necessarily reflect those of this website or its editors.