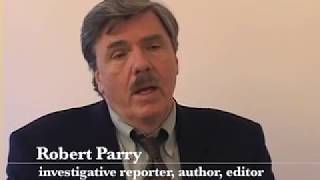 It is with a heavy heart that we inform Consortiumnews readers that Editor Robert Parry has passed away. As regular readers know, Robert (or Bob, as he was known to friends and family) suffered a stroke in December, which -- despite his own speculation that it may have been brought on by the stress of covering Washington politics -- was the result of undiagnosed pancreatic cancer that he had been unknowingly living with for the past four-five years.

He unfortunately suffered two more debilitating strokes in recent weeks and after the last one, was moved to hospice care on Tuesday. He passed away peacefully Saturday evening. He was 68.

Those of us close to him wish to sincerely thank readers for the kind comments and words of support posted on recent articles regarding Bob's health issues. We read aloud many of these comments to him during his final days to let him know how much his work has meant to so many people and how much concern there was for his well-being.

I am sure that these kindnesses meant a lot to him. They also mean a lot to us as family members, as we all know how devoted he was to the mission of independent journalism and this website which has been publishing articles since the earliest days of the internet, launching all the way back in 1995.

With my dad, professional work has always been deeply personal, and his career as a journalist was thoroughly intertwined with his family life. I can recall kitchen table conversations in my early childhood that focused on the U.S.-backed wars in Central America and complaints about how his editors at The Associated Press were too timid to run articles of his that -- no matter how well-documented -- cast the Reagan administration in a bad light.

One of my earliest memories in fact was of my dad about to leave on assignment in the early 1980s to the war zones of El Salvador, Nicaragua and Guatemala, and the heartfelt good-bye that he wished to me and my siblings. He warned us that he was going to a very dangerous place and that there was a possibility that he might not come back.

I remember asking him why he had to go, why he couldn't just stay at home with us. He replied that it was important to go to these places and tell the truth about what was happening there. He mentioned that children my age were being killed in these wars and that somebody had to tell their stories. I remember asking, "Kids like me?" He replied, "Yes, kids just like you."

Bob was deeply impacted by the dirty wars of Central America in the 1980s and in many ways these conflicts -- and the U.S. involvement in them -- came to define the rest of his life and career. With grisly stories emerging from Nicaragua (thanks partly to journalists like him), Congress passed the Boland Amendments from 1982 to 1984, which placed limits on U.S. military assistance to the contras who were attempting to overthrow the Sandinista government through a variety of terrorist tactics.

The Reagan administration immediately began exploring ways to circumvent those legal restrictions, which led to a scheme to send secret arms shipments to the revolutionary and vehemently anti-American government of Iran and divert the profits to the contras. In 1985, Bob wrote the first stories describing this operation, which later became known as the Iran-Contra Affair.

Parallel to the illegal arms shipments to Iran during those days was a cocaine trafficking operation by the Nicaraguan contras and a willingness by the Reagan administration and the CIA to turn a blind eye to these activities. This, despite the fact that cocaine was flooding into the United States while Ronald Reagan was proclaiming a "war on drugs," and a crack cocaine epidemic was devastating communities across the country.

Bob and his colleague Brian Barger were the first journalists to report on this story in late 1985, which became known as the contra-cocaine scandal and became the subject of a congressional investigation led by then-Senator John Kerry (D-Mass.) in 1986.

Continuing to pursue leads relating to Iran-Contra during a period in the late 80s when most of Washington was moving on from the scandal, Bob discovered that there was more to the story than commonly understood. He learned that the roots of the illegal arm shipments to Iran stretched back further than previously known -- all the way back to the 1980 presidential campaign.

Consortiumnews.com was founded by Robert Parry in 1995 as the first investigative news magazine on the Internet. The site was meant to be -- and has become -- a home for important, well-reported stories and a challenge to the inept but dominant (more...)
Related Topic(s): Crack Cocaine; Iran; Iranian Hostage Crisis; Journalism; Politics; Propornot; Robert Parry; Ronald Reagan; Truth; Website, Add Tags
Add to My Group(s)
Go To Commenting
The views expressed herein are the sole responsibility of the author and do not necessarily reflect those of this website or its editors.