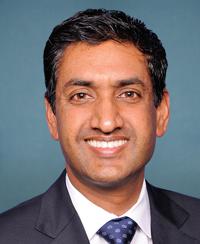 Recall how the charge that "Saddam gassed his own people" greased the skids for war on Iraq. It may be a bit unfair to expect Rep. Ro Khanna (D, California) to remember. He was cramming for the bar exam when the gassing accusations began to pile up to support "regime change" in Iraq. Now, though, Ro Khanna has no excuse for not doing his homework before buying into the propaganda line that "Assad gassed his own people."

"Saddam's gassing his own people" was such an effective rhetorical and emotional flourish against "the evil Iraqi dictator" that, a decade later, neocons (with nary a dent in their teflon armor from the fiasco in Iraq) tried it again, with "the evil Syrian dictator," Bashar al-Assad, the target this time. Again, the rhetoric was very effective, but in the end President Barack Obama was smart enough to figure out a way to avoid an open attack on Syria. Instead, and against his better judgment, he did acquiesce to the National Security State by authorizing CIA arming of "moderate" rebels. Less than a year later, in a moment of unusual candor, Obama admitted that the notion of "moderate" rebels in Syria was a "fantasy." (See: click here.)

Sadly, "progressives" like Amy Goodman still parrot the official canard about Syrian President Bashar al-Assad "gassing his own people" in the Damascus suburb of Ghouta on August 21, 2013. Ro Khanna is simply taking his cue from the rhetoric of Obama, for whom he ended up working and from Amy, the kind of "progressive" he learns from -- or doesn't.

Note to: @RoKhanna: Your recent words on @democracynow re Syria are oddly damning: You said: "We called for regime change," "helped arm" rebels, have "moral responsibility" to not "walk away." Even added the canard re Assad's "chemical attacks against his own people." See: click here

A Rare Moment When Obama Faced the Neocons Down

At first, President Barack Obama was hardly a profile in courage, doing nothing to restrain John Kerry's disingenuous, evidence-free charge that Assad was responsible for the chemical attack at Ghouta. We Veteran Intelligence Professionals for Sanity saw the sarin attack as a false-flag operation and told Obama so. (See: click here.) We also appealed to then-Chairman of the Joint Chiefs of Staff Martin Dempsey to warn the President, and it is clear that he did so (he probably needed little urging from us). (See: click here.)

in any event, to Obama's credit and against the advice of virtually all his aides, he came up with an artful way to fend off strong pressure to attack Syria on what he had been warned were almost certainly false pretenses. Obama surprised almost everyone by publicly conceding that Congress should have some say before the U.S. started an open war on Syria. That delaying tactic allowed enough time for Russian President Vladimir Putin to help Obama avoid getting involved in another overt regime-change war. Putin played deus ex machina in helping lift Obama out of the corner into which he had let himself be painted.

President Putin told Obama that the Russians had persuaded Assad to give up his vestigial chemical weapons to be destroyed, under UN inspection, on a U.S. ship specifically outfitted for such tasks. Just two weeks later, Obama still found it politic to read from the neocon teleprompter about Syrian culpability for the chemical attack in Ghouta. In his address to the UN General Assembly on Sept. 24, 2013, he declared, "It's an insult to human reason and to the legitimacy of this institution to suggest that anyone other than the [Syrian] regime carried out this attack." He knew better.

Not a "Slam Dunk"

Typically, Obama waited a few years until he considered it safe to tell the "rest of the story" presumably for posterity. He told his unofficial biographer, Jeffrey Goldberg of The Atlantic (see the April 2016 issue), that National Intelligence Director James Clapper had warned him in late August 2013 (a week before he went to St. Petersburg to meet with Putin and a month before his U.N. speech) that the evidence pinning blame on Damascus for the sarin attack was far from airtight.

Buried in Goldberg's fulsome article was Obama's revelation that Clapper had interrupted the President's morning intelligence briefing "to make clear that the intelligence on Syria's use of sarin gas, while robust, was not a 'slam dunk.'" Clapper chose his words carefully, echoing the language that CIA Director George Tenet used to assure President George W. Bush that a case could be made to convince the American people that Iraq had weapons of mass destruction.

This time around, intelligence community analysts on Syria saw no persuasive evidence that Assad had authorized a sarin attack in Ghouta, and the honest ones wanted to avoid responsibility for another fiasco like the attack on Iraq, which was "justified" by fraudulent intelligence. Clapper may have feared he had a burgeoning revolt on his hands. There is even some chance that Clapper himself was trying to avoid repeating his unconscionable, consequentially deceitful performance before the war on Iraq.

We Found What Wasn't Really There

Ray McGovern works with Tell the Word, the publishing arm of the ecumenical Church of the Saviour in inner-city Washington. He was an Army infantry/intelligence officer and then a CIA analyst for 27 years, and is now on the Steering Group of Veteran Intelligence Professionals for Sanity (VIPS). His (more...)
Related Topic(s): Assad; Obama; Progressive Democrats; Propaganda; Regime Change; Sarin; Syria, Add Tags
Add to My Group(s)
Go To Commenting
The views expressed herein are the sole responsibility of the author and do not necessarily reflect those of this website or its editors.