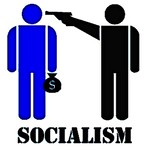 There are "people's" groups all over the world who advocate the overthrow of the men at the top -- the Oligarchs -- who control nations.

These people's groups want to install socialism as the answer to Oligarchy.

The Oligarchs -- bankers, mega-corporate CEOs, financiers, government leaders, intelligence agencies--collude to cut out competition so they can stand alone at the summit of the mountain. And they call this arrangement SOCIALISM. They PROMOTE socialism. They've staked out OWNERSHIP of socialism worldwide.

In other words, the "people's" groups, who claim to be battling for a better world, are doing the Oligarchs' bidding. Unconsciously, or on purpose.

Socialism has never been about toppling power-hungry leaders. Its pretension of equality and share-and-care is a cover for totalitarianism by the few, for the few.

Karl Marx, while predicting a coming utopia on Earth, expressed the absolute need for a "transition" phase called the "dictatorship of the proletariat."

Of course, that was a partial misnomer. The "dictatorship" part was correct, but the proletariat would never run it. They would labor for it. They would look up from ground level at the leaders who were supposedly their friends and guardians -- and soon realize they'd been taken in by a long con. There was no transition government. There was just the same old Oligarchy under another name, that's all.

From Gary Allen's 1971 classic, None Dare Call It Conspiracy:

"We are being socialized in America and everybody knows it. If we had a chance to sit down and have a cup of coffee with the man in the street...he might say: 'You know, the one thing I can never figure out is why all these very, very wealthy people like the Kennedys, the Fords, the Rockefellers and others are for socialism. Why are the super-rich for socialism? Don't they have the most to lose"?' In reality, there is a vast difference between what the promoters define as socialism and what it is in actual practice. The idea that socialism is a share-the-wealth program is strictly a confidence game to get the people to surrender their freedom to an all-powerful collectivist government. While the insiders [Oligarchs] tell us we are building a paradise on earth, we are actually constructing a jail for ourselves."

When a mega-corporate CEO, whose company is in deep financial trouble, magically secures a giant loan through a crony, and when that corporation continues to pollute the land and destroy lives, and while the government agency that should be hauling off the CEO to prison sits on its hands, that's socialism in practice. That's the real thing.

The government may not officially own such corporations, as in the classical definition of socialism, but at the top, the government and the biggest corporations are cooperating, as one. It's a distinction without a difference.

Why don't more people understand all this?

Related Topic(s): Corporations; Equal Rights; Socialism; Socialism For The Rich, Add Tags
Add to My Group(s)
Go To Commenting
The views expressed herein are the sole responsibility of the author and do not necessarily reflect those of this website or its editors.