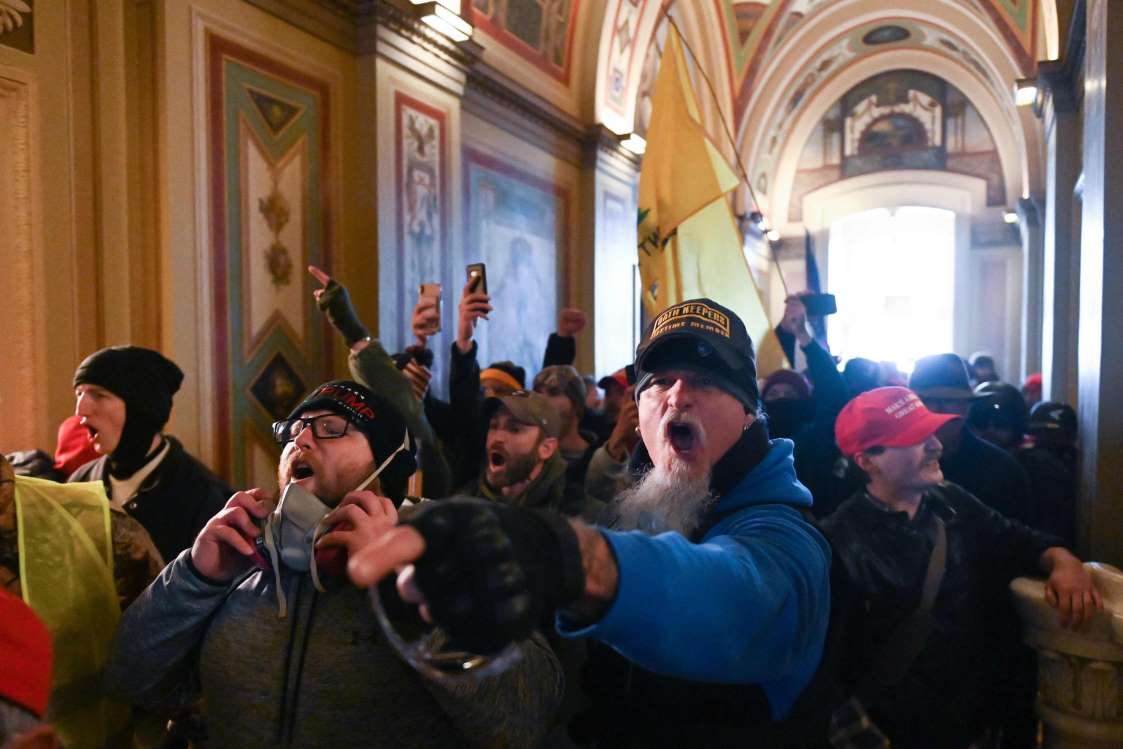 Once inconceivable: rioters in the halls of Congress
(Image by Roberto Schmidt)   Details   DMCA

I just watched a newly released video on CNN, with Don Lemon reacting to a video (apparently taken by one of the rioters; I am unaware of any professional journalist who entered the Capitol amid the vanguard of the rioters) of a Metro DC cop being crushed in a power door as the police tried to keep rioters out of an unidentified entrance to the Capitol. The striking thing is that the several hundred people facing the entrance the police were defending were uniting their movement and surging against the ones in front, using the whole weight of the crowd to attempt to gain entry! That's very dangerous, of course. People in the middle could be trampled, crushed if the ones in back decided to make an at-all-costs surge forward, but given the rhythmic growls (the only word to decribe it; no human word or chant could be discerned) of the crowd as they surged against the police in the entry, one might almost posit that at least some of them had had practice in this maneuver!

Lemon did not know the condition of the cop who was crushed, but there were signs of bleeding around his mouth and nose. One rioter eventually brought the problem to the attention of another cop, who can be heard shouting, "I know!"

51 percent of Republicans polled (St.Pauls/Marist) say Trump is not at all to blame for the riot.

The sounds coming from FoxNews opinion-side broadcasters and their guests are becoming more desperate.

I wish this was the spring or summer, I'd go fishing, Joe!

On the subject of a Million Man Militia March, which I received an alert about this morning from Joe Baltar, one of my colleagues from Down East, who publishes an information clearing house called FBI Watch on the 20th: well, that is improbable. Why do I not just say, uh, impossible, nuts, wacko, the ravings of anonymously user-named unbalanced people?

Although the number-- a million-- is certainly out of reach, an exaggeration stated only for public-relations reasons, and aimed at Trump's beloved "low information voters," there is a very real possibility of a six-figure demonstration simultaneous with the inauguration.

Why? Think back to August, when according to the Department of Transportation, 460,000 vehicles (the vast majority, motorcycles) came into and left Sturgis, South Dakota, for the 2020 Sturgis Run. This event was certainly the largest single mass gathering in America during the pandemic, and was, by all accounts, the largest protest-- peaceful-- against masks and other Covid-mitigation measures in America-- or the world-- during that time.

It was a super-spreader which by two weeks after its close had resulted in cases of Covid-19 in eight different states. Given that the participants in the event-- both visitors and Sturgis residents-- were notably unwilling to take part in contact tracing, there is no telling how many cases might eventually be tied (though not traced) to the Run.

If half of the people who went to Sturgis came to Washington, the police, even the National Guards of DC, Maryland, Virginia and Delaware, might be unable to contain them, since as many cops/Guardsmen might have to be deployed in protecting the Inauguration (which will be socially distanced) as in containing a couple of hundred thousand angry right-wingers with no regard whatsoever for public safety. Nor for America's standing among nations, which, though trashed by the intentions and results of neocon foreign policies since at least the late Clinton Administration, had not yet been subject to valid criticism for being actually, not just rhetorically, on the brink of dictatorship.

In my opinion, democracy just passed a test; it may be that on Inauguration Day it will see another. However, the chances are much better that any advertised Million Man March (which will have women too) will be, like the Vote-Counting Day Riot of Trump supporters and conspiracy theorists, in the range of a few tens of thousands-- or less, depending on the weather-- and that can be contained, if law-enforcement planning takes the threat of even that many potential rioters seriously.

And how can there be a Militia March if no one is allowed to carry their guns, as the Mayor of DC, Muriel Bowser, has made very clear? Most real militia-people are going to stay home for that reason.

Q-Anoners and other conspiracy-theory thralls, riled up by Donald Trump, Donald Trump Junior, and the Rudy Giulianis, Sidney Powells, Tucker Carlsons and Rush Limbaughs of the world (will Marjorie Taylor Greene, the Q-Anon Congresswoman, be with the marchers or at the Inauguration?), will be their proxies. However, if the death toll is higher, the militias will be forced to choose between violent reaction or saying to themselves, "These people are crazy. We must disengage and use other tactics."

So, improbable though it may be, the chance of a public gathering of the general magnitude of the Moratorium March of April 24, 1971 (half a million, the largest gathering I was ever a part of), by mostly unmasked Americans who want to end the democratic process if Trump isn't in charge, exists. However, democracy was not broken by this unprecedented riot, merely dented.

Related Topic(s): Capitol Riot; Million Man Militia March; Police Response To Riot; Rightwing Militia; Trump Lies Incite Riot, Add Tags
Add to My Group(s)
Go To Commenting
The views expressed herein are the sole responsibility of the author and do not necessarily reflect those of this website or its editors.