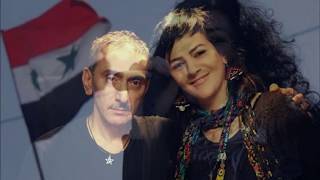 Rim Banna passed away at the age of 51. Her death on March 24, after a decade-long battle with cancer, brought grief to Palestinians everywhere.

Rim, a Palestinian Christian from Nazareth, united the Palestinian people across political and geographic divides.

When she sang for the Homeland, nothing mattered but Palestine. Christians and Muslims, Fatah and Hamas, Gaza and Ramallah, all became one.

Through her soulful and warm voice, she imparted sorrow, yet celebrated life. Her songs "Fares Odeh" and "Sarah" were poetic interpretation of precious young Palestinian lives cut short by Israeli soldiers.

The butterfly will carry you to the back of a cloud
The gazelle will run with you to a hollow of sycamore
The scent of bread will take you, a martyr, to the embrace of your mother
The star said to him, "Bring me to the courtyard of my house."
"Take me to the mattress of my slumber."
Sleepiness climbed up my sides
And settled in my head."

Music unites Palestinians when politicians fail. In fact, while for years the collective calls for "Palestinian unity" has gone unheeded, Palestinian music has continued to bring Palestinians closer.

Deep-rooted Palestinian culture is what makes Palestinians who they are, a people with a unique and lucid identity, despite 70 years of exile, ethnic cleansing, sieges, numerous borders and wanton killings.

And when Rim sang, her voice penetrated through the seemingly impregnable Apartheid walls, checkpoints, military curfews and unbridgeable distance.

It was during the First Intifada (popular uprising) of 1987 that Rim gained access to the hearts and homes of many Palestinians; initially in Palestine and, eventually, all over the world. Her voice, soft and reassuring, gave hope to those who lived under a seven-years long, relentless Israeli military campaign. Israeli tactics, then, aimed at breaking the spirit of the rebelling Palestinian people.

Rim's music offered new, modern renditions of traditional Palestinian songs, but without erasing the historical and cultural identity of that music.

Her music belongs to the Palestinian music genre of nationally-driven and culturally-centered art form, aimed at reintroducing -- and, sometimes, reinventing -- the past in a more relatable fashion.

Although a rarely publicized form of resistance, cultural resistance is at the heart of the Palestinian fight for freedom.

Related Topic(s): Cultural Genocide; Cultural Hegemony; Israel; Music; Palestinian; Resistance; Rim Banna, Add Tags
Add to My Group(s)
Go To Commenting
The views expressed herein are the sole responsibility of the author and do not necessarily reflect those of this website or its editors.