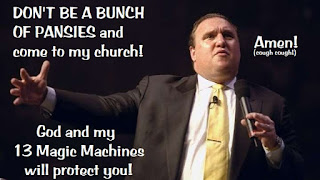 Televangelist Claims He Has Magic Machines That Will 'Shoot Down' Coronavirus.

Yesterday pastor Rodney Howard-Browne was arrested, causing many of the Christian Right to go Christofascistically crazy.

(Self) Righteous Arrogance has been defined as feeling morally superior to others. We've written about it countless times in the past decade when writing about politics and religion. The strong, Christian Right variety, we've referred to as Christofascism, imposing harsh penalties of discrimination and intolerance on those who oppose its will.

Never before, however, has righteous arrogance been so deadly as today during these times of a pandemic.

In the past, we've referred to them as moralizing morons, but their steadfast flouting of government (read CDC) guidelines are harmful and their outpouring of misinformation may be more deleterious to the populace than Trump's.

Sadly, they have flocks (congregations)

In keeping with Trump's early "it-will-go-away" response to the virus, many of his staunchest CC supporters like Robert Jeffress declared the virus to be no big deal, but as the deaths piled up, so did the sermons of God's vengeance.

· As with AIDS, natural disasters or anything bad happening to groups of humanity as a whole, God's vengeance comes into play for most of these Sacred Cows. Of course, preying on fear and guilt is the Evangelical's stock and trade. How can they control their innocent (read: desperate and/or simply gullible) flocks?

Rev. Dan Vojir is has been writing/blogging on religion and politics for the better part of ten years. A former radio talk show host (Strictly Books " Talk America Radio Network) and book publisher, Dan has connected with some of the most (more...)
Related Topic(s): Chris Cuomo; Christofascism; Christofascists; Corona Virus Coronavirus Covid-19; Corona Virus Coronavirus Covid-19; Demonizing; Frank Schaeffer; Misinformation; Pastor Robert Jeffress; Righteous Arrogance; (more...) Robert Jeffress; Rodney Howard-browne, Add Tags  (less...)
Add to My Group(s)
Go To Commenting
The views expressed herein are the sole responsibility of the author and do not necessarily reflect those of this website or its editors.