Putting A Train In The Doghouse 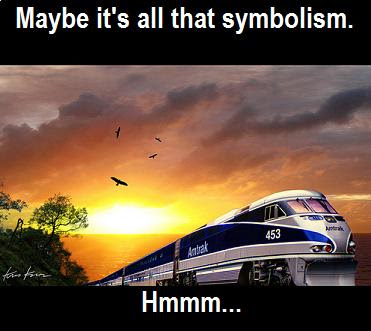 Two hundred fifty thousand dollars - sounds like a lot, doesn't it? But not if you're in the travel business - or the bigot business.

Fifteen years ago, I was able to get some pretty remarkable local advertising for SF's AIDS Emergency Fund. The market value for transit posters and production of 4 black & white public service announcements: $350,000. In 1995 dollars. In a local market.

According to FRC's Tony Perkins, however, this amount is an absolute fortune of taxpayers' money going out to advance the "homosexual agenda."

If there was ever proof that the Obama Administration has gone off the rails, it's Amtrak. For the first time in the train service's history, Amtrak has decided to spend a quarter-million dollars recruiting homosexual passengers. As you may know, Amtrak isn't a private business. This is a government-run business, meaning that this $250,000 is taken directly from taxpayers' pockets. In a very real sense, this ad campaign is a federal endorsement of homosexual behavior -- one of the most serious public health threats in America.

Whoa! Tony! Do you mean that Amtrack is going to turn into one big rolling bathhouse? Hmmm. I don't think so. Even though Perkins thinks that every LGBT person is one big horny STD, one tiny piece of outreach to get gay dollars is not going to cause an influx of drag queens sipping martinis in the Vista Dome lounge. Point of fact: Amtrak should be so lucky! I know plenty of wonderful girls who could liven up that dreary run to Topeka! Of course, Amtrak is really not so innocent or naive: for years it has bucked the market trends in following Perkins' homophobic ideology, but to put it in a more Biblical perspective, "They saw the Light!"

Says Darlene Abubakar, the director of national advertising for Amtrak, "Most all of the major airlines, hotels and others in the travel and tourism industry target the LGBT market segment. Amtrak 's goal is to raise the level of awareness of the benefits of train travel and increase consideration and ridership amongst this segment."

And $250k is small change to the FRC. Promoting "Family Values" and lobbying for same costs over $20 million per year. FRC employs over 200 people and has satellites in all fifty states. FRC is a lobbying organization and, unless I've missed something, politicians still don't give discounts.

And all of Lou Engle's trips to the "Dark Continent" add up (not to mention keeping him odor-free with Right Guard!).

In their report Funding the Culture Wars, the National Committee for Responsive Philanthropy[18] lists the Family Research Council as one of the leading organizations funding the activities of the conservative movement. As a non-profit organization, FRC is completely dependent on donations from supporters.

Of course, the FRC screamed "Donations, Please!!" while ragging the administration on a piddling $250k:

Yet Washington is targeting the demographically small homosexual population-probably because marketing surveys suggest it is also one of the richest. So let's be honest. This Administration is more interested in riding the gravy train than getting the culture back on track.

Rev. Dan Vojir is has been writing/blogging on religion and politics for the better part of ten years. A former radio talk show host (Strictly Books €" Talk America Radio Network) and book publisher, Dan has connected with some of the most (more...)
Related Topic(s): Amtrak; Anti-gay; Family Research Council; Family Research Council; Financing Homophobia; Homophobic; LGBTI Discrimination; Obama Administration; Values Voter Summit, Add Tags
Add to My Group(s)
Go To Commenting
The views expressed herein are the sole responsibility of the author and do not necessarily reflect those of this website or its editors.