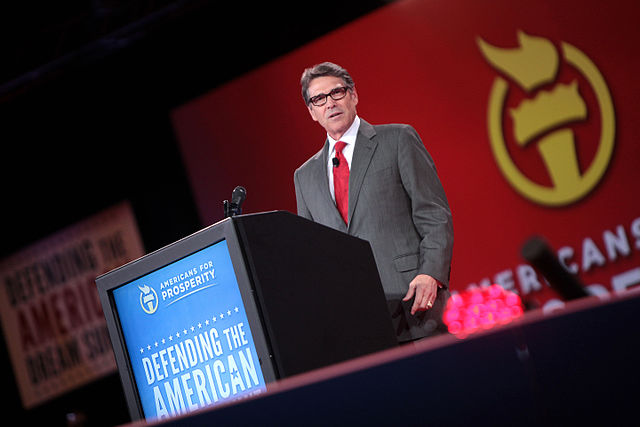 When Rick Perry sought the Republican Party's 2012 presidential nomination, eliminating the US Department of Energy was part of his campaign platform. Granted, he had trouble remembering its name, but he wanted the department gone. Completely.

On January 19, Perry appeared before the US Senate's Energy and Natural Resources Committee, a first step toward his confirmation as Secretary of Energy in the coming Trump administration. How does he feel about the department these days? Well, somewhat differently:

As a cabinet official, Perry's bailiwick will sprawl across all 50 states and the several US territories. He'll dispose of a budget a fraction of the size that he controlled as governor of Texas (less than $30 billion versus more than $100 billion), but within his sphere of influence, he'll actually wield more, and less contestable, power.

Is anyone surprised that Perry doesn't want to eliminate a particular job now that it's going to be HIS job? If so, you shouldn't be. David Stockman told you all about that phenomenon 30 years ago.

US president Ronald Reagan appointed Stockman, a former Republican congressman from Michigan, to the post of Director of the Office of Management and Budget in 1981. He served in that post until 1985 before his candor and honesty got him in trouble and brought him to the point of resignation. Then he authored what, to my mind, remains the classic account of how power corrupts, The Triumph of Politics: Why the Reagan Revolution Failed.

Most summaries of The Triumph of Politics emphasize Congress's profligacy in running up huge deficits by increasing spending while cutting tax rates. But Stockman also takes a hard look at the executive branch, and not only from the angle of the president's willingness to cooperate with Congress.

Each newly appointed Reagan cabinet secretary, swept into power on the promise to hack away at government root and branch, was happy to do so in every department. Except his own. "Yes, cut spending -- everywhere but here. THIS department is indispensable and, by the way, under-funded."

As the Perry saga demonstrates, thus shall it ever be. There may be a way to cut government down to size, but if so "electing the right people" probably isn't it.

Related Topic(s): Department Of Energy; Rick Perry, Add Tags
Add to My Group(s)
Go To Commenting
The views expressed herein are the sole responsibility of the author and do not necessarily reflect those of this website or its editors.