Addison, Texas -- June 4, 2015 -- It takes guts, a lot of guts for a Presidential candidate to embrace Muslims from the word go! Perry has got that. Given the unabashed bigotry displayed by a number of Presidential candidates against Muslims, Rick Perry took the bold step in paving the way for inclusionary politics in the GOP.

Copyrighted Image? DMCA
Perry announces his candidacy with two Muslims on stage with him
This is a historic event in the annals of America's evolution of pluralistic politics. Perry may turn the tide and knock out bigotry in other candidates minds, even if it is in their hearts.

It was a joy to see two Muslims with him on the stage with Perry; Amir Rupani and Arman Rupani.
Even though a few other candidates have included fellow Americans without any bias, Perry did it right off the bat from the very first announcement. That has never happened before. Thanks to my friends Imam Yahya and Dr. T.O. Shanavas for pointing out at the election winning Presidents Clinton, Bush and Obama who were inclusive. President Bill Clinton paved the way for inclusionary politics by having Imam Johnny Hasan around him during his campaign. President George W. Bush had two Hijab wearing women on the stage with him in Perrysburg, Ohio in 2000. Of course, Obama is the most inclusive of all the winning presidents, and he has given the full meaning and uplifted our immortal declaration of independence, that all men are created equal.
As an American committed to a building a cohesive America, I salute Governor Rick Perry. It is a bold move to be applauded by all Americans, and I hope the other candidates shelve their bigotry towards any one of the 320 Million Americans.

At this point in our history, Muslims and Gays and Lesbians are the target of blatant bigotry, and as a pluralist, my focus would be how each candidate will fare from their attitudes towards these two new minorities of America. I hope to interview all the presidential candidates to see how pluralistic they are, and how much they really understand about the need to have a strongly woven social fabric for a safe, secure and prosperous America. We cannot have a candidate who is prejudiced towards fellow Americans.

Among the array of 2016 candidates, four will pass the initial test; Hilary Clinton, Jeb Bush, Chris Christie and Rick Perry. Copyrighted Image? DMCA
Ghouse, Rupani and Hannity selfie
I don't know how many of the Presidential candidates we have to be forgiven for 'they know not' about fellow Americans. In the 2012 run, the following candidates displayed their shameless bigotry towards Muslims and some of them have said they will not hire a Muslim in their administration, and they are; Newt Gingrich, Herman Cain, Mitt Romney, Mike Huckabee and Michelle Bachman .

Sean Hannity was at the announcement for an exclusive interview with candidate Perry, and prior to that he asked me, if I was supporting Perry, I said, not yet, not until I talk to him about what kind of America he envisions, is he committed to a cohesive America? Sean asked me what I mean by it. I said it is an America where every American is given equal access to employment, entrepreneurship, and governance in his or her pursuit of happiness, and where no American has to live in apprehension or fear of the other.

Despite the crowd, he walked up to me and asked me about how my heart was doing, what a great human being he is. Hold your judgment, Sean Hannity is not against Muslims, he is clearly against the Radicals 'among' Muslims, just as Muslims are. On the other hand, even though he sounds like bashing Obama or Hillary Clinton, he is not, all he wants to do is fulfill his patriotic conservative duty of holding the government accountable and he goes to the extreme doing that. Men like him keep the government on their toes and protect the nation from going to dogs, he is a great American patriot in my books, and I hope he will grill the next president with the same enthusiasm as he does with Obama.

The American Dream
Each one of us has a dream, a dream to have loving family, livable wages, a home, reliable car, decent health care and a comfortable retirement.

It is our right, and our founding fathers laid the foundation of the creed for such a society, " We hold these truths to be self-evident, that all men are created equal, and that they are endowed by their creator with certain inalienable rights that among these are Life, Liberty, and the pursuit of happiness. "

Indeed Martin Luther King Jr. expressed the same in his famous speech, "I have a dream that our little children will one day live in a nation where they will not be judged by the color of their skin but by the content of their character."
The Native American wisdom, has always been good, Chief Seattle said it perfectly, and "All things are connected. Whatever befalls the earth befalls the sons of the earth. Man did not weave the web of life; he is merely a strand in it. Whatever he does to the web, he does it to himself." 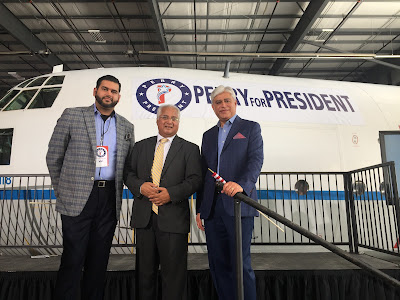 Copyrighted Image? DMCA
Rupanis and Ghouse
It is time for Americans to speak up against any candidate who shows bigotry against any one, we should not let anyone get away with that.

Please note I am not affiliated with any political party. I am seeking to talk to all the presidential candidates and understand them if they know what it means to build a cohesive America. Here is a ten minutes video, which we hope to make a documentary for 2016 inquiries are welcome. http://americatogetherfoundation.com/
Mike Ghouse is a thinker, writer and a public speaker, and is committed to building a cohesive America and offers pluralistic solutions on issues of the day. All about him in 63 links at www.MikeGhouse.net
# # #

Related Topic(s): Anti-islam; Islamaphobia; Islamophobia; Rick Perry, Add Tags
Add to My Group(s)
Go To Commenting
The views expressed herein are the sole responsibility of the author and do not necessarily reflect those of this website or its editors.