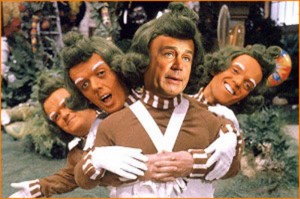 The tan-"tastic" Republican House leader should put away the packing crates for the moment because he may not be moving into the Speaker's digs as quickly as the Corporate Media would have you believe. This may disappoint a ton of DC lobbyists who have funded his campaign (including the tan-in-a-bottle industry and unfiltered Camels), but Boehner's facing some considerable obstacles before he even thinks about replacing Pelosi's gavel with a carton of Marlboros.

While phone poll predictions for November tilt the Congressional balance of power from blue to red (or in Boehner's case, orange), three salient facts are omitted from their calculations: 1) most undecided voters don't decide until they enter the booth; 2) Tea-baggers who support Boehner have not been successful in recent elections as they are increasingly seen by mainstream Republicans as a disorganized clump of loony racists; and 3) - most important -- a large segment of the younger (less racist, more Democratic) voters simply don't use phones tied to land lines. Pollsters have yet to infiltrate cell phone technology,so this large demographic block is literally uncounted in their analyses.

As Andy Ostroy wrote at Huffington Post a few weeks ago:

John Boehner (R-OH) is a hopeful man. He hopes that voters are both stupid and forgetful. He hopes they have no recollection whatsoever of the eight years of largely Republican rule during the Bush years; years that saw a loss of eight million jobs and the failed policies that led to the worst financial meltdown in America's history since the Great Depression over eighty years ago . . . Boehner boasted of Republicans' near-unified opposition to Obama's stimulus bill, health care reform and environmental legislation. "We began to show people we are different.' No, the only thing you're showing people is that your #1 goal as a party is to screw the poor and middle class while obsessively pursuing massive tax cuts for the rich."

Glenn Beck should relax his grip on his piece of chalk -- Americans are not (yet?) so dumbed-down and numbed by TeeVee that they will consciously vote against every social program that has sustained this nation for the last half century or more. The younger voters not counted in the phone polls want affordable health care for themselves and their aging parents. They rely on their federally-funded college loans and grants and, eventually,first-time home buyer programs. They want to see their young children's public schools funded and functional. They expect the monies they're paying into Social Security will be there for them when they retire. And they understand the hypocrisy of Cancer Man (h/t to the X Files) preaching about reducing the deficit while simultaneously insisting that tax cuts for the wealthy be upheld and Democratic job-creating policies fought tooth and tan.

The abolition of the few remaining strands in the social safety net tops Boehner's libertarian-leaning agenda. Face it, the Tanned One is owned by Big Tobacco and other leviathan lobbying groups. Of course he's anti-labor and pro business.

"From 2000 to 2007, Mr. Boehner flew at least 45 times, often with his wife, Debbie, on corporate jets provided by companies including R. J. Reynolds . . . The New York Times reports. In addition, over the last decade he has taken 41 other trips paid for by corporate sponsors or industry groups, often to popular golf spots. That makes him one of the top House beneficiaries of such travel, which has recently been curbed as a result of changes in ethics rules. While many lawmakers in each party have networks of donors, lobbyists and former aides who now represent corporate interests, Mr. Boehner's ties seem especially deep. His clique of friends and current and former staff members even has a nickname on Capitol Hill, Boehner Land. The members of this inner circle said their association with Mr. Boehner translates into open access to him and his staff."

Do they allow nonsmokers in Boehner Land? What's the official motto -- a Wolfe Tanning Bed in every rec room, Bible in every classroom, and ashtrays in every hospital ER? I guess when you suck down as many carcinogens as Orangina does, you lose any compassion for the welfare of workers in hazardous conditions. Coal dust causing you lung tumors? Toughen up! Your feet are swimming in industrial waste on the factory floor? Shaddup you crybaby! Be grateful there's still a manufacturing job available in America.

Facts are facts and Boehner's agenda of legislation favoring millionaires and billionaires over the middle- and working-class is an attempt to lock us into the same leaky boat that Bush used to float the American economy over the dam and into the rocks below, doubling, in the process, the deficit and unemployment. Us "Mericans may be stupid, but we're not suicidally stupid.Somewhere inside, we know on an elemental level, that a vote for Republicans this year will pull the proverbial plug on us all. Death panels, indeed.

Kathy never expected a career in radio as a talk show producer. Born and raised in Atlanta, Georgia, Kathy was completing her nursing degree when in 2001 - in an emergency - she was asked to fill in as the producer of Mike's program. Within a few (more...)
Related Topic(s): Agenda; Republican, Add Tags
Add to My Group(s)
Go To Commenting
The views expressed herein are the sole responsibility of the author and do not necessarily reflect those of this website or its editors.