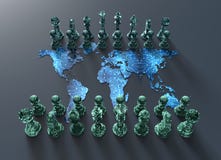 In another universe - the game is yet to begin.
(Image by dreamstime.com)   Details   DMCA

Senator John Cornyn's (R-TX) opening statement at the Senate January 11th hearing (full video of the hearing) on the confirmation of Rex Tillerson as Secretary of State, and Senator Jefferson Session's (R-AL) vote in support of Tillerson suggested that:

Tillerman is unlike other powerful business leaders who have an insulting way of thinking or behaving that comes from believing that they are better, smarter, and more important than other people (i.e. psychopathic); and they are concerned excessively or exclusively with themselves, seeking or concentrating on their own advantage, pleasure, and well-being, without regard for others (i.e. again psychopathic).

In Senator Cornyn's own words:

I was immediately struck by the inferences this statement leads to about the failure of corporate leadership and its lack of connection to the teachings of Jesus of Nazareth; and the fact that millions of so-called "followers" of Jesus can reconcile and support like minded political leaders.

Cronyn's statement suggests that powerful business leaders are oddities if they have humility. Jesus was certainly powerful in his teachings and light that he brought to the world according to the early Christian establishment.

Cornyn hints that powerful business leaders are also odd if they are altruistic. And yet the teachings of Jesus are characterized by altruism and cannot practically be denied.

Is Cornyn's praise just words, or was it meant to convey a worthy quality of character about Rex Tillerson? I believe it was meant to be the latter.

Therefore, what is the opposite of humility?

Let's look at one definition of arrogance: an insulting way of thinking or behaving that comes from believing that you are better, smarter, or more important than other people.

What is the opposite of altruism?

A definition of selfish is: concerned excessively or exclusively with oneself, seeking or concentrating on one's own advantage, pleasure, or well-being without regard for others; arising from concern with one's own welfare or advantage in disregard of others.

Related Topic(s): Arrogance; Capitalism; Christian Values; Egoism, Add Tags
Add to My Group(s)
Go To Commenting
The views expressed herein are the sole responsibility of the author and do not necessarily reflect those of this website or its editors.