Now a fossil fuel executive will run America's foreign policy, right out in the open. Donald Trump gets credit for a kind of barbaric transparency 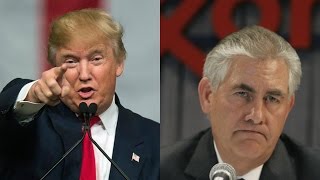 In one of the futile demonstrations that marked the run-up to the Iraq war, I saw a woman with a sign that read "How Did Our Oil End Up Under Their Sand?" In nine words she managed to sum up a great deal of American foreign policy, back at least as far as the 1953 coup that overthrew Mossadegh in Iran and helped toss the Middle East into its still-boiling cauldron.

If the Senate approves Rex Tillerson after his testimony on Wednesday, they'll be continuing in that inglorious tradition -- in fact, they'll be taking it to a new height, and cutting out the diplomats who have traditionally played the middleman role.

Rex Tillerson -- who has literally spent his entire working life at Exxon -- is big oil personified. It's like appointing Ronald McDonald to run the agriculture department (which is certainly a possibility, since that job is still unfilled).

So in one sense Tillerson's appointment simply makes formal what has long been clear. But in another way, his announcement is truly novel: the honor (secretaries of state are usually considered the second-most important official in our government) comes after a season of disgrace at the world's largest oil company, in a moment when the energy business is on the ropes and when its product is causing the greatest crisis the planet has yet faced.

Those three things are linked, of course. The disgrace is the long, slow reveal by investigative reporters that Exxon knew all about climate change as early as the late 1970s. Their scientists were so far ahead of the curve that management was taking precautions and planning strategy a quarter-century ago -- building drilling rigs to account for the sea level rise they knew was coming, and plotting to bid for leases in an Arctic they knew would melt.

But instead of telling the rest of us, the investigations revealed their deep involvement in the effort to spread doubt and confusion about climate change. Given the consequences, this is a series of corporate crimes that makes VW's emissions cheating seem like stealing a candy bar from the 7/11. In a rational world, Congress would be grilling Tillerson about the company's conduct, not preparing to hand him the country's plum unelected job.

But climate change means not just the collapse of the planet's fundamental systems (after the hottest year ever measured, global sea ice has been charting record lows -- literally the world looks different from outer space). It also means that the energy business is in serious trouble.

Big oil has under-performed on the stock market for years. Exxon's once-sterling profit record is now checkered at best. And as a result it's resorted to every kind of chicanery. USA Today reported on Monday that, through a European subsidiary, it managed to do business with Iran, Syria and Sudan while those countries were under US sanctions (sanctions the, um, secretary of state would need to enforce). Everyone knows that the company stands to make billions-with-a-B if America lifts its sanctions on Russia. With its business in decline, these are the kinds of moves that Exxon has been reduced to plotting.

The global response to climate change is the third part of the puzzle. If we listened to climate scientists and ramped up our commitment to change, the oil business would suffer deeper damage yet. That was the hope of the Paris accords, which called for ratcheting up the modest plans agreed to in 2015, in accordance with emerging science.

Bill McKibben is the author of a dozen books, including The End of Nature and Deep Economy: The Wealth of Communities and the Durable Future. A former staff writer for The New Yorker, he writes regularly for Harper's, The Atlantic Monthly, and The (more...)
Related Topic(s): Climate; Exxon; Oil; Rex Tillerson; Shame, Add Tags
Add to My Group(s)
Go To Commenting
The views expressed herein are the sole responsibility of the author and do not necessarily reflect those of this website or its editors.