Following is the talk I gave to the Take Back the American Dream conference panel that I moderated,Making It In America: Reviving and Strengthening U.S. Manufacturing. Also on the panel were Rep. John Garamendi, (D-CA); Yvette Pena Lopes, Director of Legislation and Intergovernmental Affairs at Blue Green Alliance and Scott Boos, deputy director of the Alliance for American Manufacturing.

You have undoubtedly heard the numbers, almost all of them bad.

We have a trade deficit of more than $550 billion dollars a year. This is actually an improvement from before the financial collapse, but only because people's buying power remains down. 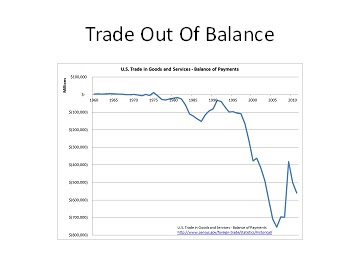 If we were engaged in actual "trade" the money would be coming back as fast as it is leaving -- that is what the word "trade" means. And that would be a win-win for all trade partners. But it has not worked out that way. Imports stay ahead of exports.

Our manufacturing sector has been bleeding out of our country along with the money.

The lure of low prices, fueled by currency manipulation and subsidies, combined with the ability to treat workers in ways they cannot be treated here where people have a say, has led businesses to close factories here and open them over there. Eventually, entire industries vanish.

This problem of the loss of manufacturing -- and its jobs and factories and industries -- has been building for decades but in the Bush years it reached a crescendo. We lost 54,000-plus factories, and 1/3 of all of our manufacturing jobs.

Our country has allowed key industries, key supply chains and key national skills to erode or vanish. And along with those we allowed communities and entire regions to decline. And worse than just decline -- how many of you have seen Detroit with your own eyes?

We have lost hard-won capacity that will take enormous investment to get back. We lost a large part of our ability to make a living in this world. And now we are feeling the consequences of these losses.

This is because manufacturing is different.

I would like to present an overview of the key policies ideas for reviving American manufacturing.

First, of course, is the trade problem. We have to find ways to BALANCE trade.

Related Topic(s): Jobs; Manufacturing, Add Tags
Add to My Group(s)
Go To Commenting
The views expressed herein are the sole responsibility of the author and do not necessarily reflect those of this website or its editors.