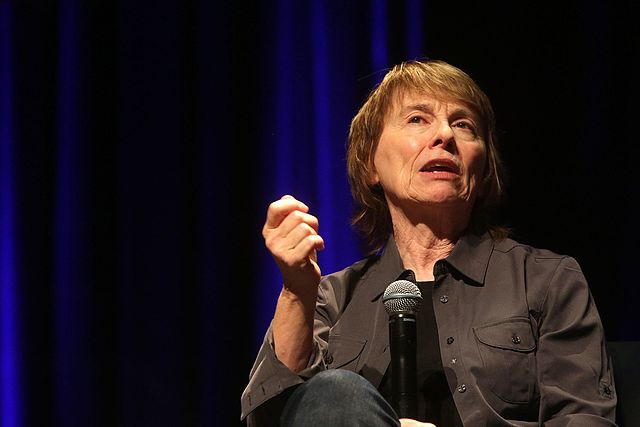 After the Washington Post released the footage of Trump boasting to Billy Bush, Trump's political surrogates claimed that he was engaging in "locker-room talk" -- thereby impugning locker-room talk. Trump himself went through the public ritual of apologizing for his boasting. In the end, the "Access Hollywood" footage did not prevent Trump from winning a decisive electoral victory in the 2016 presidential election.

Today, a women's advocacy group known as UltraViolet is playing airing the footage on a large portable screen, including sound and subtitles, in front of the Washington Monument. Perry Stein reports in the Washington Post (dated October 6, 2017) that UltraViolet is doing this with a permit issued by the National Park Service.

According to Stein's article, the members of UltraViolet are showing the "Access Hollywood" videotape because in their estimate, Trump's boasting shows that he is "a proud sexual predator." But are there any other ways to interpret what Trump says on that video?

The title of the published interview accurately names the three main topics that Camille Paglia discusses in the interview.

In addition, I admire Camille Paglia's courage in criticizing and countering feminist zealotry.

In any event, in the published interview, Jeanie Pyun asks Camille Paglia about the cultural impact of Hefner's magazine.

Camille Paglia credits Hefner's magazine with "revolutioniz[ing] the persona of the American male." She also refers to "Hefner's new vision of American masculinity."

Camille Paglia says, "Hefner reimagined the American male as a connoisseur in the continental manner, a man who enjoyed all the fine pleasures of life, including sex. Hefner brilliantly put sex into a continuum of appreciative responses to jazz, to art, to ideas, to fine food."

Skipping ahead a bit in the interview, Jeanie Pyun asks, "What do you think about the fact that Trump's childhood hero and model of sophisticated American masculinity was Hefner?"

In response, Camille Paglia says that before the 2016 presidential election, she "kept point out that the mainstream media based in Manhattan, particularly the New York Times, was hopelessly off in the way it was simplistically viewing Trump as a classic troglodyte misogynist."