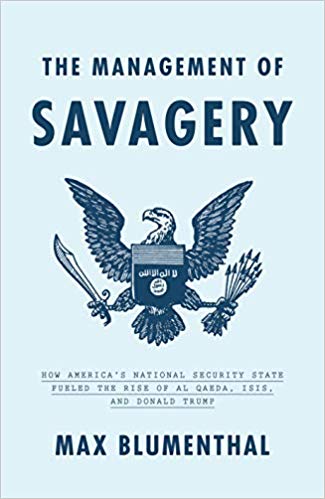 Deconstructing modern imperialism
(Image by amazon.ca)   Details   DMCA
The 9/11 dust is finally settling. Blumenthal takes us on a nightmare tour of the landscape, starting with two key moments in 2018 that dramatically expose the plot behind the passion play taking place even as we sip our morning coffee: Trump's absence from the establishment's lovefest-funeral for McCain, and a few days later, the New York Times editorial 'I Am Part of the Resistance Inside the Trump Administration', excoriating Trump's 'amoral leadership'.

McCain has been latched onto as the anti-Trump icon (he's safely dead so he can't mess things up, a habit this very Trump-like loose cannon was prone to). At the virtual state funeral (absent the head of state), McCain's daytime talkshow host daughter Meghan repackaged McCain's 'finest hour', the (illegal, horrible, criminal) Vietnam War as a fight for the 'life and liberty of other peoples in other lands', a celebration of American empire, rebuking Trump (America was always great) as a threat to its survival.

Blumenthal's message is crystal clear: US-Israel policy from 1979 on has been to create and support Muslim terrorism, even as it claims to be fight terrorism. It used them in Afghanistan to undermine the Soviet Union, and has used them ever since to secure control of world politics. Create the problem, and provide the solution.

Hillary 2009: The people we are fighting today, we funded 20 years ago" It wasn't a bad investment to end the Soviet Union, but let's be careful what we sow because we will harvest. Jake Sullivan 2012 email to Clinton: AQ [al-Qaeda] is on our side in Syria.

Trump understands this and that it is wrong, and was elected to end the unending wars. He tried in Afghanistan and Syria, but failed. Perhaps due to his incompetence, but more likely because the deep state/ Pentagon like the permanent wars (good for business, Israel's bidding, young male safety valve, distraction from social problems).

He thought he could satisfy Israel with Jerusalem and settlements, but Israel is never satisfied. It openly nurtured Muslim terrorism in Syria, bombing Iranian troops and Hezbollah who, along with Assad and latecomer Russia, were the only actors actually fighting the terrorists.

Efraim Inbar (Begin-Sadat Center for Strategic Studies): The destruction of Islamic State is a strategic mistake': the West should seek the further weakening of Islamic State, but not its destruction. It is a useful tool in the fight against Iran and its proxy Hezbollah.

The goal is a buffer zone between Israel and Hezbollah, like Israel's use of Maronite Christians in Lebanon in the 1980s, perpetrators of the infamous Shabra and Shatila massacre of 460 Palestinian refugees. The Golan Knights (I'm not kidding) is/ was a unit of the Free Syrian Army to which Israel allows cross-border travel, and provides food and construction equipment. They help Israel in their bombing of pro-government (especially Iranian) positions. When they mistakenly lobbed a mortar at Israel, they apologized, as Israel admitted publicly.

Israel is unhappy that ISIS is mostly washed up. Hence the urgency of direct war on Iran.

Only war against Iran will satisfy Israel (for the time being). Which Trump seems eager to launch. And which was a centrepiece of McCain's warmongering.

So when Trump solemnly pontificated in 2017: We underscore that states that sponsor terrorism risk falling victim to the evil they promote, he was disingenuous, as he was falling into the same trap, legalizing and allying with (terrorist) MEK, in his goal of overthrowing the Iranian government. But then Trump loves Israel, the world's biggest terrorist (next to the US). So whether or not the deep state likes him, he is mostly doing their dirty work anyway.

But that was before Russiagate. Like punishing a naughty schoolboy using dirty language, the neocon school principal had to rap Trump's knuckles. They seem to have browbeat him into more-or-less conformity, even earning brownie points for his wild actions against Iran, but he spoils even that by turning the entire world against him.

At this point, Trump's next move is impossible to predict. Perhaps he has realized he can't 'make America great again' and keep US world control at the same time. Besides meaningless stats on employment, America has not moved ahead on any count of 'greatness'. Perhaps Trump has forgotten about MAGA and is back onboard with the deep state after all, counting on his solid right wing base and the current cultural civil war in the US to get reelected.

Meanwhile, al-Qaeda et al are happy to take the challenge in the World Monster Championship, welcoming US destablization of 'kufar' [infidel] governments in the Muslim world (Afghanistan, Iraq, Libya, Syria, Yemen, Sudan), assuming that the oppression will lead Muslims to emigrate to their shiny, new caliphate, still hanging by a thread in Syria. That this is hopeless doesn't matter, as Allah will come thundering in to save the day eventually. It's highstakes gambling that seems to have made this a lose-lose outcome for both sides.

Jihad theorist Abu Bakr Naji, inspired by the invasion of Iraq in 2003, coined the terms management of savagery, establishing administrations of savagery to exploit chaos from US regime-change wars. This will fill the US-induced security vacuum, and is the mirror image of the US neocon Project for a New American Century's 'Rebuilding America's Defenses' in 2000, advocating a global Pax Americana unrestrained by international law. 'Who needs international law?' ask both the neocons and the terrorists.

Related Topic(s): Capitalism; Conspiracy; Hezbollah; Holocaust; Iraq; Israel; Muslim; Reviews_ Books; Syria; Terrorism, Add Tags
Add to My Group(s)
Go To Commenting
The views expressed herein are the sole responsibility of the author and do not necessarily reflect those of this website or its editors.