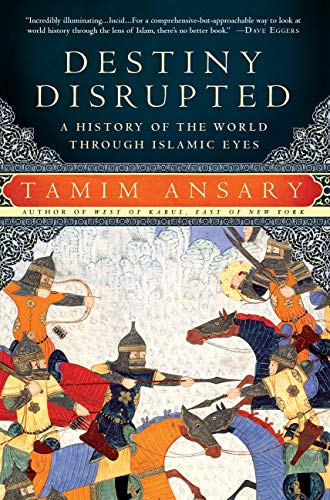 Reviving the 'House of Peace' as the peace movement's guiding principle

Those of us lucky/unlucky enough to live in the West see the rest of the world revolving around us, like Europe's 17th century sun, which, of course, orbited around the earth. So goes the western narrative: pre-Greece, Greece/Rome, Christianity, renaissance/ reformation, enlightenment, industrial revolution, nation-states/empire, WWI&II, cold war, democratic capitalism, end-of-history.

But Galileo tried a counterfactual: what would things look like, if I were standing on that blazing sun? Well, the rest-is-history. Maybe we aren't the centre of the world. What if I were born and learned history as a Muslim?

This is Ansari's project in Destiny Disrupted: A History of the World Through Islamic Eyes (2009). Born Muslim in Afghanistan, he arrived in the US in the 1960s and jumped right into western life, seeing his new home through both his and the counter cultural eyes of his new age young friends, so he knows the value of changing skins and seeing things anew.

The first thing that hits the western ego in this counterfactual journey is just how insignificant Europe seems, let alone America. Apart from the barbaric 11--12th century Crusades, Europe doesn't even merit a footnote until the 16th century, being on the edge of the known world, a motley collection of squabbling, illiterate fiefdoms. Similarly, remote China, which if any civilization has a claim on being the centre of the world, it's the one.

Mired as we are today in what looks, from a western point of view, as humanity's endgame, war and environmental apocalypse hovering on the horizon, the end of the end-of-history, the Islamic view is salutary. Its basic theme is: Islamic civilization is the House of Peace, vs the non-Muslim world as the House of War.*

This explains the miraculous spread of Islam from the founding of the first Muslim community in 620, which, within 3 decades, encompassed most of the known world (China excepted). There are no miracles in the life of the Prophet, apart from the Quran and, if you like, the astonishing conquest and spread of Islam.

The Prophet's 60 years, and the Rightly Guided Caliphs in the quarter century following his death in 632, form the core religious allegory of Islam, paralleling the birth, miracles, crucifixion, and resurrection of Jesus, and the Apostles. Unlike the Christian and Judaic narratives, the Muslim one was carefully documented, with parables (hadiths) and the life of the Prophet (sunna) and the caliphs as guideposts through the subsequent 17 centuries.

How did this happen? If the world Islamic hegemony (empire is a misnomer) is even acknowledged in the western narrative, this bona fide miracle is dismissed as the work of savages on horseback with swords, terrifying one and all, looting and pillaging.

The truth is the opposite. The House of War Persian Sassanids and Greek Byzantines had just exhausted themselves fighting in the early 7th century, which made the spread of the House of Peace easier. Suddenly Muhammad and his mission to literally 'save the world' went viral. What attracted people was that this latest 'invasion' was bringing peace when it arrived (yes, on horseback with swords, but universally welcomed). 'There is no force in religion' is a basic Islamic crede.

As everywhere in history, empires mean oppression, exploitation. The Muslims became known as 'good' hegemons. Only the now unemployed ruling class lost out in the switchover. And the spoils of war were evenly divided, one-fifth going to Mecca. No one had to convert, just pay a tax as acknowledgment of Islamic rule, which meant peace and order.

Their non-Machiavellian guiding principle was to expand the House of Peace, the 'house' ruled by Islam, voluntarily or if threatened, 'by the sword', toppling the warlike imperialists, letting the locals get on with their lives without the threat of genocide. Genocide and theft are the principles of the House of War. 'Fighting for peace', jihad (literally, struggle) is the ruling principle of Islamic politics.

The narrative is gripping, an inspiration to the always growing community of believers, attracting converts to peace (salam) today, as it has done for 16 centuries. The Muslim social project proliferated along the ancient trade routes by seas, rivers and lands, brought primarily by merchants, and continues today, when most Muslims live and work in the House of War, their own lands under its control.

Related Topic(s): Capitalism; Galileo; History World; History and Religion; Islam; Islamic State; World Peace, Add Tags
Add to My Group(s)
Go To Commenting
The views expressed herein are the sole responsibility of the author and do not necessarily reflect those of this website or its editors.