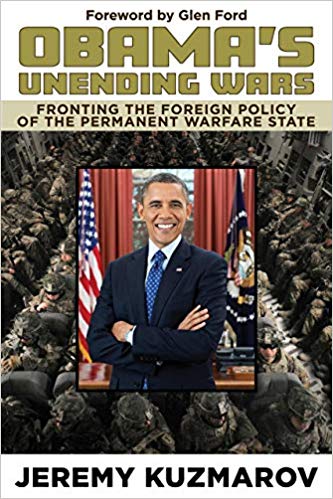 In Obama's Unending Wars, Kuzmarov has brought together many telling proofs, nuggets, of just how horrible the world is, and just how responsible the US and its henchmen around the world are. A kind of who-does-it. Kuzmarov is that rare analyst (Belen Fernandez is another) who respects footnotes, leaving fascinating bits there that would otherwise detract from his focus.

Standing out in my mind after reading OUW is the power that China has matured into in the past three decades, the US more and more resentful and frightened by it. Russia also has reclaimed much of its international clout, abandoned by Yeltsin, retrieved and nurtured by Putin, again infuriating the US. Other developed countries play almost no part in OUW, as if passive spectators of the geopolitical battles now being fought, as if they don't even exist.

But as a Canadian, that makes perfect sense.

Canada long ago lost any respect internationally, respect it once merited during and immediately after WWII, the only 'good war' the world has ever seen, fought courageously by 'good guys' against 'bad guys'. We are living in a grey fog ever since. OUW is a fine lighthouse piercing through it.

That brings me to the other impression Kuzmarov's book leaves: a mourning for the once well-meaning Uncle Sam, under the last great US president, Franklin Delano Roosevelt, who presided over a quasi-socialist experiment, the only way to extract the US from its capitalist hell, and who made friends with everyone, except the 'bad guys' Hitler and Tojo. sadly FDR died before he could cement his vision of a peaceful world order, where the US was not the world policeman fighting pretty well the rest of the world, able to cow most countries, and making enemies of those who insisted on independence.

Kuzmarov mentions FDR only as author of the 'Good Neighbor Policy' towards Latin America, basically cancelling the Monroe Doctrine. It was a mixed bag, with FDR's acceptance of Nicaragua caudillo Samoza as 'our son of a b*tch', but even in admitting that shameful act, FDR underlines his distaste for realpolitik. FDR was fighting an already ravenous US imperialist elite, who openly supported Hitler, who had, since the invasion of Philippines in 1898, been invading, occupying, setting up puppet regimes increasingly, especially in Central America.

But FDR is the antithesis of Obama. It is Wilson who is the role model for Obama. An intellectual president with an elegant plan, a mission, to bring the world to heel in the name of American principles, and anyone in the way -- beware!

There are so many facts marshalled, it is hard to keep focused. Halfway through, the name Crown caught my eye, a recurring motif. Already on p20, we learn that one of Obama's primary financial sponsors was Henry Crown & Company, which owns 20% of General Dynamics (GD), manufacturer of the Trident rocket, Stryker troop carrier, bunker buster bombs, LAV-25 amphibious armored vehicle, Abrams tank, nuclear subs, naval destroyers " During Obama's presidency, General Dynamics bought out 11 firms specializing in satellites, geospatial intelligence, surveillance, and reconnaissance, working for 16 intelligence agencies (how many are there!) after investing $10m per year in lobbying. Then it gets interesting. GD got caught lying to the government, but -- what, me worry? -- paid a $4m 'fine' and the same year (2016) tripled its profits over 2000.

There are many Crowns. Their dynasty began as Material Services Corporation, one of the government's largest WWII contractors (sued for $1m for price-gouging). Rechristened GD by 1962, it was awarded a $7b Pentagon contract for bombers (influence peddling investigation quashed). James Crown told the New York Times that his father was 'fairly hawkish about Israel's security,' and felt Obama was 'terrific on Israel.' Lester told the Chicago Jewish News that the two-state solution was find if 'you will have a demilitarized, peaceful Palestinian entity.' Ha! Not a 'state'. Hey, did Lester help Jared Kushner write his 'deal of the century'?

Obama's legacy is clear. He is a good provider. He is just not interested in corruption. The imperial gravy train is full speed ahead. It is now an 'intelligence' government, with shadowy private corporations increasingly doing the imperial dirty work, leaving the real 'bad guys' looking cultured, too smart to be nasties. Bush-Cheney have their Blackwater (rechristened Xe now Academi). Obama told CIA director Leon Panetta the CIA would 'get everything it wanted.' The NYT reported that 'in the 67 years since the CIA was founded, few presidents have had as close a bond with their intelligence chiefs as Mr. Obama with Mr. Brennan' (architect of the CIA's extraordinary rendition program).

It certainly looks, now, that Trump has boxed himself in everywhere he has tried to be original: Iran, Venezuela, Russia, Afghanistan, Syria" But Obama put the finishing touches on the box. Kuzmarov makes it clear that all of those Trump 'initiatives' -- economic war against Iran, Venezuela, and Russia, negotiations with the Taliban, US troops in Syria (uninvited) -- were all in Obama's game plan.

Obama promised 'we can'. We all pointed to his vote against the Iraq invasion in 2003, his Nobel Peace prize, misunderstanding his 'no stupid war' for 'no war'. Obama saw himself as the 'smart war' guy. After all he is 'black', so he can't possibly be an agent of US whiteman imperialism; he's so much smarter than stupid Bush with his 'stupid war'.

Reading Kuzmarov is like reading a speeded-up survey of the past decade, with the same scenarios repeated: something smacks of people power, the US nurtures instability (take your pick, Nicaragua, Burkina Faso ...), leading to a collapse of authority, growth of insurgents, 'invite' in US troops, make sure your new puppet is secure. But that could be Haiti, or Chad, or Syria.

It's hard to keep on top of all the machinations in the world, so you can see OUW as a handbook, focus on the gaps in your knowledge. I found Yemen especially instructive. The Houthi only recently formed as a force, harking back to the pre-colonial Zaydeh clan that ruled in the north prior to the outbreak of civil war in the 1960s (i.e., they have street creds).

Related Topic(s): Al-Qaeda; Foreign Policy Failure Afghanistan; Obama; Trump, Add Tags
Add to My Group(s)
Go To Commenting
The views expressed herein are the sole responsibility of the author and do not necessarily reflect those of this website or its editors.