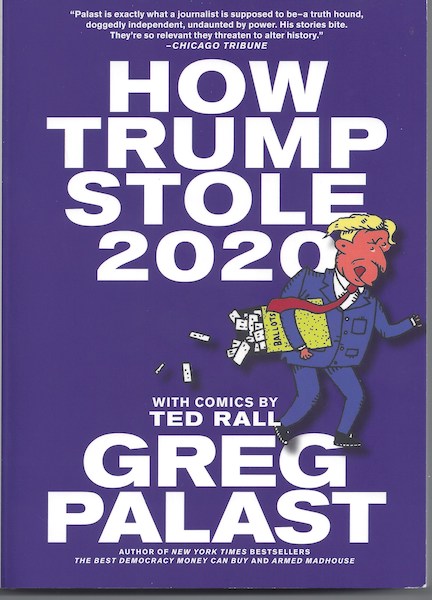 Cover of the book
(Image by Greg Palast)   Details   DMCA
>

At the start of Greg Palast's latest blockbuster, How Trump Stole 2020: The Hunt for America's Vanished Voters, which immediately jars you with its hysteron-proteron "The End," you are assured, dear reader, dear voracious student, that the nightmare was not your fault.

The fault, as pre-figured in Election 2018, which Trump won, is "all the votes burgled, jacked, swiped, shoplifted, purloined, filched, fiddled and snatched from citizens not of a whitish orange hue."

And Trump may actually not be re-elected, Palast continues.

But here's everything in the works leading toward his re-election. It is a tubful of bloodbaths.

How did Trump win? A blatant prefigure is Georgia, a state on the brink of becoming swing, with a burgeoning Latinx and African American population, soon to become minority-majority.

There's a fierce battle, so far being won by Georgia's Brian Kemp, a reincarnation of Colorado's Donetta Davidson, the original Purgin' General,* and Katherine Harris, whose notorious two hats back in 2000 bought G. W. Bush the presidency: Florida Secretary of State and Co-Chair of the campaign to elect GW. Helped, of course, by the Sunshine State's governor, GW's brother, Jeb. How Harris stole the election was detailed in an intricate study by Palast at the launch of his career as investigative reporter extraordinaire.

Only Kemp is in many ways worse. As sitting secretary of state, he engineered his own, not someone else's, gubernatorial victory in 2018. He did not recuse himself. Palast caught him redhandedly removing 340,134 qualified voters (minorities for supposedly having moved from their former addresses when they hadn't) from the registration rolls, thereby displacing the people's choice, Stacey Abrams, who would have been Georgia's first black woman governor as well as the nation's. As is, she was the first black woman in the country to be nominated by a major party for the position of governor. She supposedly lost the election by 50,000 votes. As minority leader of the state's general assembly for six years (and assemblywoman for 10 years before that) and a Harvard-educated lawyer and wide-ranging activist, Abrams was more than qualified. I'd like to see her run as Biden's VP candidate, though he has opted for Michele Obama "in a heartbeat." Now Tammy Baldwin is at the top of the shortlist.