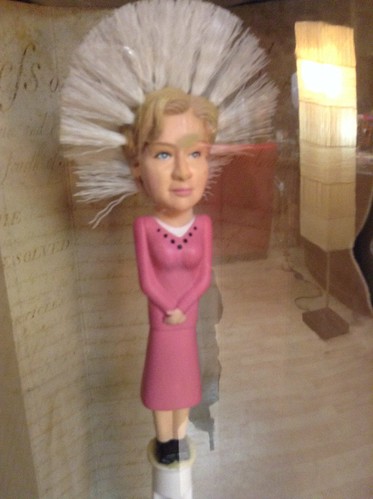 Alternet is reporting, and it's all over Twitter, that, in a four-hour documentary series coming soon on Hulu"

"Hillary Clinton blasts Bernie Sanders: 'Nobody likes him, nobody wants to work with him, he got nothing done'"

The article reports that Hillary said, in the docuseries, as The Hollywood Reporter reveals during an interview with her:

"He was in Congress for years. He had one senator support him. Nobody likes him, nobody wants to work with him, he got nothing done. He was a career politician. It's all just baloney and I feel so bad that people got sucked into it,"

The article adds, "Asked if she will endorse and campaign for Sanders should he get the Democratic Party's nomination this year, Clinton would not say, but she took the opportunity to expand on her concerns:

"I'm not going to go there yet," Clinton told THR. "We're still in a very vigorous primary season. I will say, however, that it's not only him, it's the culture around him. It's his leadership team. It's his prominent supporters. It's his online Bernie Bros and their relentless attacks on lots of his competitors, particularly the women. And I really hope people are paying attention to that because it should be worrisome that he has permitted this culture - not only permitted, [he] seems to really be very much supporting it. And I don't think we want to go down that road again where you campaign by insult and attack and maybe you try to get some distance from it, but you either don't know what your campaign and supporters are doing or you're just giving them a wink and you want them to go after Kamala [Harris] or after Elizabeth [Warren]. I think that that's a pattern that people should take into account when they make their decisions."

Clearly Hillary is hitting Sanders as hard as she can, trying to sabotage his campaign. I can't even put into words how disgusting and despicable she is. My hope is that the millions of people who voted for Trump not because they wanted Trump but because they can't stand Hillary will find her words an inspiration for them to vote for Bernie Sanders.

Every active Dem presidential candidate should strongly repudiate Hillary's words. And any who don't should be clearly identified.

What are your thoughts and Here are some observations from Twitter:

RT @AnaKasparian: Hillary Clinton lost to the dumbest & least qualified candidate of all time. Yet she has the audacity to refer to this el… at

RT @ibrahimpols: Since Hillary Clinton is attacking the “Bernie Bros,” let’s recall that some of her voters in 2008 refused to vote for Oba… at

Related Topic(s): Hillary Clinton; Hillary Clinton Hatred And Hostility, Add Tags
Add to My Group(s)
Go To Commenting
The views expressed herein are the sole responsibility of the author and do not necessarily reflect those of this website or its editors.