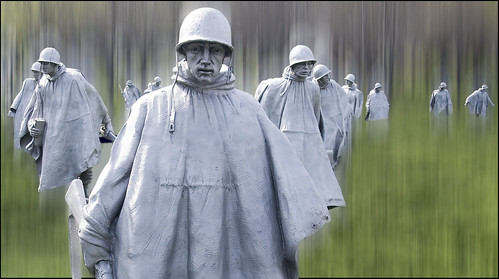 [This is the First article in a series, "Return to South Korea". For the second article click here.]

Tomorrow I will be boarding an airplane at Tampa International Airport for a flight to Inchon, South Korea. Although I have never been to Korea, I was able to maneuver a slot in the reunion of Korea veterans for the commemoration of the 100thanniversary of the 2nd Infantry Division, which was formed in 1917 during the First World War. The 2nd has a long history of being on the front line during the wars of the 20th century, and is now stationed in South Korea. I will be part of a group that is the guest of the Republic of Korea. I am going there to learn, experience Korea today and I hope to pass on some of that to readers of my diary.

With the events of the past few months and the threat of another war in Korea, I have been studying the history of the Korean War of 1950 to 1953. As I dug into it I became fascinated with how much I did not know and how much there is to learn.

The Korean War was an epoch war that had a major role in the future foreign policies of the US, and the domestic impact those policies have had on all of our lives. The war was a turning point that has evolved into where we are today. For sure it was the path setter of the direction of the Cold War between the US, China and Russia. The Cold War took a hiatus in 1991, but as many argue is now on again as the Cold War Redux.

So far my return to Korea is the remembering of childhood memories. In 1950 I was six years old. Few people had television then, so we got the news from newspapers, radio and newsreels shown in theaters before the main attraction. Current events were not discussed much in my world then, and what I heard about the Korean War was not very meaningful.

What I do remember about the war was that my mother was very worried that her brother might be sent there. All I knew about war was what I saw at the movies and that looked pretty exciting. Soon we got a TV and the war came alive in our living room.

As the next few years passed, I became aware of the shock at the battles the U.S. lost, and the shame and anger of American prisoners of war being put on displayed. I had no reason to question that the "communists" were brainwashing the prisoners. How could this be happening to an America that I was told "never lost a war because God was on our side"?

My older brother explained to me that we were fighting in Korea because of communist aggression, that the United Nations agreed with the US, and that the Russians had "stupidly" been boycotting the U.N. when the vote was taken to organize a police action with the US leading it.

I remember one day my father came home outraged that Truman had fired McArthur, who I was told was a famous war hero. How all this could be happening, I wondered. Later my mother "Liked Ike" because Eisenhower promised to end the war if he was elected president. It seemed that everybody just wanted it over. Then one day it was. American POW's were released. More outrage and shame that some of the Americans deserted and refused to come home. Finally the Korean War faded and was forgotten.

It wasn't until 1963 when I joined the Army that the Korean War had meaning to me again. In boot camp many of our instructors were combat hardened in Korea. They said we were men and they were teaching us the lessons they learned. I remember those lessons, the 20 mile marches and cleaning machine guns at 0200 in the morning. They were serious, and they told us we better be too, because one day there would be another war. I was quite impressed.

So now I am returning to Korea. I think it is going to be an epoch event for me now at the age of 73. Yet, I am trying not to have any expectations. In the next few weeks the historical places I have been reading about will come alive. I will be landing at Incheon where McArthur pulled off his amphibious landing that turned defeat into a pushback of the North Koreans and a breakout of beleaguered US soldiers from Pusan where they were barely hanging on.

In the next few days our group will be heading for the 38th, the Demilitarized Zone (DMZ) northeast of Seoul. The schedule says we will spend a few days touring the battlegrounds. Then work our way south to Seoul.

The rest I will let myself be surprised and savor it.

Related Topic(s): History; Korea; Korean War; Media Documentary, Add Tags
Add to My Group(s)
Go To Commenting
The views expressed herein are the sole responsibility of the author and do not necessarily reflect those of this website or its editors.

STAY IN THE KNOW
If you've enjoyed this, sign up for our daily or weekly newsletter to get lots of great progressive content.
Series: "Korea"