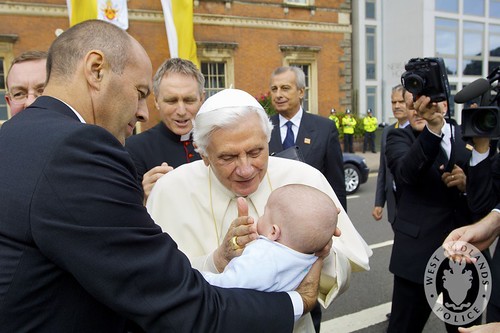 Duluth, Minnesota (OpEdNews) April 11, 2019: Retired Pope Benedict XVI, who will turn 92 on April 16, 2019, is back in the news for what he himself styles "some notes" he prepared to be published in a German-language monthly journal for clergy in Bavaria the part of Germany that he comes from.

Born Joseph Aloisius Ratzinger on April 16, 1927, in Marktl, Bavaria, Germany, he was ordained a priest on June 29, 1951. Later, as a young professor of theology, he served as a theological consultant at the Second Vatican Council (1962-1965) in the Roman Catholic Church. Among Roman Catholic theologians at Vatican II, Fr. Ratzinger was known as a reformist a liberal. In his own later estimate, he did not subsequently change his views of the reforms instituted by Vatican II.

In any event, Fr. Ratzinger was subsequently appointed Archbishop of Munich and Freising on March 24, 1977. On June 27, 1977, he was created a cardinal by Pope Paul VI. On November 25, 1981, Pope John-Paul II named Cardinal Ratzinger the prefect of the Sacred Congregation for the Doctrine and Faith a post he held until 2005. On April 19, 2005, Cardinal Ratzinger was elected the new pope. He chose the name Benedict XVI. He retired in 2013. Cardinal Jorge Mario Bergoglio of Argentina was then elected the new pope, and he chose the name Francis in honor of St. Francis of Assisi.

Recently Pope Francis convened an unprecedented summit meeting at the Vatican March 21-24, 2019, to discuss the priest-sex-abuse scandal and cover-up, and retired Pope Benedict is now adding his voice to the discussion. Benedict's so-called "notes" about the priest-sex-abuse crisis have been translated into English by Anian Christoph Wimmer and published online as "Pope Emeritus Benedict breaks silence on abuse crisis: full text" (dated April 10, 2019):

Not surprisingly, Benedict reiterates rubbish that he has been saying for years about a supposedly "egregious event" that occurred in the 1960s, which at times he refers to as "the Revolution of 1968."

In her article, Glatz makes the following statement: "In an extensive study on the causes and context of the abuse of minors by priests in the United States from 1950-2010, the John Jay College of Criminal Justice of the City University of New York found 'the majority of abusers (70 percent) were ordained prior to the 1970s,' and 44 percent of those accused entered the priesthood before 1960.'"

Instead of dwelling on the priest-perpetrators, Benedict changes the subject and launches himself on a lament about how the sacrament of the Eucharist is "devalued into a mere ceremonial gesture" that is supposedly "offered at family celebrations or on occasions such as weddings and funerals to all those invited for family reasons."

Related Topic(s): Catholic; Faith; God; Pope Benedict; Pope Benedict XVI; Pope Emeritus; Pope Francis; Presence; Priests; SOUL; (more...) Theology, Add Tags  (less...)
Add to My Group(s)
Go To Commenting
The views expressed herein are the sole responsibility of the author and do not necessarily reflect those of this website or its editors.