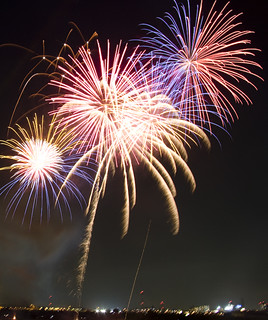 Fireworks
(Image by bayasaa)   Details   DMCA
>
Day, July 3, is the official celebration day for what supposedly happened on the 4th of July. Well, at least it's the day given for people to take off from work-- those who work for government or some industries.
I suggest that we reinvent independence day as a day of mourning-- a remembrance of good intentions, when courageous people fought a good fight for good goals-- against a top-down monarchical and highly exploitive corporate (East Indies Company) entity.
People died for freedom-- at least freedom for white men.
Today we live under a heavily exploitive corporate, top down system where we get to vote for one of two corporate parties chosen candidates, or token third party candidates with next to no chance of winning. This sham is worsened by heavy gerrymandering of districts, which lead to state legislative bodies and districts and a congress led by people elected by a minority.
Our media-- the major ones-- are owned by the big corporations. They help maintain the illusion of Democracy, when what we really have is a blend of plutocracy and corporatocracy.
We have parades that celebrate American exceptionalism, and scores of millions of Americans who actually think the USA is the best nation in the world. Best for what? Corporations? For selling arms? for spending more per-capita on health care while serving the smallest percentage? There are dozens of measured indicators where the US is not longer in the top twenty. The fall from greatness doesn't matter though to a poorly educated mass of ignorant people whose prime religion is consumerism, or to a small handful of people who are riding high as members of the one percent, buying their Mercedes, Porsches and million dollar plus big city apartments.
Chris Hedges says we're edging closer and closer to the state peoples reach when the rebel or engage in revolution. Maybe. Meanwhile, this July, shed a tear for a dream that people fought and died for, which is being taken away by corrupt politicians and judges who routinely betray the interests of we-the-people for the sake of corporations and the ultra wealthy.
Talk to someone about the problems with the system. Take some action today in memory of all those who died fighting for independence. Celebrate the new rights given for marriage equality, and take that as a sign that there are still things we can do to move towards greater freedom. Make a list of things you can do. Share them below in the comments.

Related Topic(s): Consumerism; Freedom; Independence Day; July 4th; Plutocracy; Revolution, Add Tags
Add to My Group(s)
Go To Commenting
The views expressed herein are the sole responsibility of the author and do not necessarily reflect those of this website or its editors.