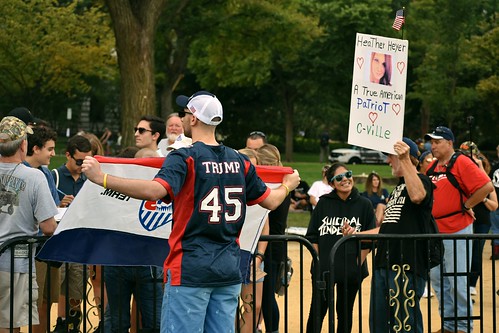 WASHINGTON DC, SEPT 16 2017: The .Mother of All Rallies. event in support of Donald Trump draws a small group to the National Mall.
(Image by kelly bell photography)   Details   DMCA

Ignorance now rules the U.S. Not the simple, if somewhat innocent ignorance that comes from an absence of knowledge, but a malicious ignorance forged in the arrogance of refusing to think hard about an issue. We most recently saw this exemplified in Donald Trump's disingenuousness 2019 State of the Union address in which he lied about the amount of drugs streaming across the southern border, demonized the immigrant community with racist attacks, misrepresented the facts regarding the degree of violence at the border, and employed an antiwar rhetoric while he has repeatedly threatened war with Iran and Venezuela. Willful ignorance reached a new low when Trump - after two years of malicious tweets aimed at his critics - spoke of the need for political unity.

Willful ignorance often hides behind the rhetoric of humiliation, lies and intimidation. Trump's reliance upon threats to impose his will took a dangerous turn given his ignorance of the law when he used his speech to undermine the special council's investigation into Russian interference in the 2016 election. He did so with his hypocritical comment about how the only things that can stop the "economic miracle" are "foolish wars, politics or ridiculous partisan investigations," to which he added, "If there is going to be peace and legislation, there cannot be war and investigation." According to Trump, the Democrats have a choice between reaching legislative deals and pursuing "ridiculous partisan investigations" - clearly the country could not do both.

William Rivers Pitt is right in claiming that in one moment Trump thus tied "the ongoing Robert Mueller investigation inextricably to terrorism, war and political dysfunction." As Mike DeBonis and Seung Min Kim point out, House Speaker Nancy Pelosi added to this criticism by "accusing Trump of an all-out threat to lawmakers sworn to provide a check and balance on his power."

Malicious ignorance is a willful refusal to reflect enough to do justice to the complexity of an idea and its potential consequences. This is a kind of ignorance that combines the mindset of tyrants with a notion of unreflective certainty that banishes doubt and views opposing positions as acts of treason that are often deserving of some kind of punitive action. Unfortunately, we live at a moment in which ignorance appears to be one of the defining features of U.S. political and cultural life. Ignorance has become a form of weaponized refusal to acknowledge how the violence of the past seeps into the present, reinforced by a corporate-controlled media and digital culture dominated by fatuous spectacles and consumerist trivia.

In the age of Trump and the rise of illiberal democracies all across the globe, James Baldwin was certainly right in issuing in No Name in the Street the stern warning that "Ignorance, allied with power, is the most ferocious enemy justice can have." Trump's ignorance lights up the Twitter landscape almost every day. He denies climate change along with the dangers that it poses to humanity, shuts down the government because he cannot get the funds for his wall-- a grotesque symbol of nativism-- and heaps disdain on the heads of his intelligence agencies because they provide proof of the lies and misinformation that shapes his love affair with tyrants. This kind of power-drunk ignorance is comparable to a bomb with a fuse that is about to explode in a crowded shopping center. This dangerous type of ignorance fuses with a reckless use of state power that holds both human life and the planet hostage.

Ignorance in a Culture of Immediacy

It sometimes feels as if the age of big ideas has come to an end, transformed into a scattered set of cultural spheres that reinforce the elevation of ignorance to a national ideal and form of weaponized politics. For example, culture has been turned into a disimagination machine that prioritizes a culture of metrics and the hypnotic seductions of the screen. (It's no coincidence that Trump is the first president whose main source for understanding the world and generating policies is the television.)

Trump's ignorance lights up the Twitter landscape almost every day.

Americans live in a culture of immediacy that has created new forms of social and historical ignorance and erasure. As writer John Gray points out, disparaging the past has become "a mark of intellectual respectability." He then reinforces the point by quoting literary critic Francis O'Gorman, who argues that in the current age marked by "a revival of intolerance" it has become "easier to affirm elements of a Nazi ideology recast in versions of white supremacy." What Gray was rightfully suggesting, often missed by many progressive commentators, is that fascism never confined itself to the past and is now winning ideologically on a new kind of battlefield.

Time no longer has a long dure'e; it has to be instantaneous, pulsating with information that barely adds up to a sustained idea. Time is now connected to short-term investments and quick financial gains, defined by the nonstop and frenetic perpetuation of an impoverished culture of global exchange. Time is no longer connected to long-term investment in community, the development of social well-being, and goals that benefit young people and the common good. Time has become a burden more than a condition for contemplation.

The flow of money now replaces the flow of thoughtfulness, critical dialogue and informed judgment. This is exacerbated in a culture of immediacy in which instant gratification rules and thoughtful contemplation becomes a thing of the past. Long-term investments have given way to short-term investments, and in doing so, have erased any long-term commitments to valued relationships, young people, intimacy, justice and compassion. Barbarism presents itself in acts, experiences and forms of suffering that vanish from the mainstream media as quickly as they appear.

The language of neoliberalism erases any notion of social responsibility, and in doing so, eliminates the belief that alternative worlds can be imagined. Under the Trump administration, the world of the robust imagination, a vibrant civic literacy, and inspiring and vitalizing ideas are turned into ashes. Ignorance, forgetfulness and cruelty now merge into a notion of common sense that sustains the willful ignorance of the rich and powerful. How else to explain Commerce Secretary Wilbur Ross stating during the shutdown, when thousands of federal workers missed their paychecks, that he did not understand why some of them were visiting food banks or seeking food assistance when they could be taking out loans.

This is a form of ignorance that morphs into a culture of cruelty, one that is all too apparent as part of larger mechanisms of power and violence in the United States. As civic culture disappears, historical memory is broken, and words such as fascism, nativism, genocide, internment, war and violence appear as empty abstractions, only to be trivialized or dismissed in the 24-hour news cycle now driven by Trump's Twitter convulsions.

In the current historical moment, there is a growing worldwide rejection of liberal democracy. We live in an age in which a distinctive form of authoritarianism has emerged which fuses the toxic austerity policies and ruthless ideologies of neoliberalism with the racist and ultra-nationalist principles and attitudes of a fascist past. What might be called a state-manufactured grammar of violence, white supremacy and ignorance no longer hides in the shadows of power and ideological deception. It is now displayed as a nativist badge of honor by right-wing politicians and pundits such as Steve Bannon.

Related Topic(s): Ignorance, Add Tags
Add to My Group(s)
Go To Commenting
The views expressed herein are the sole responsibility of the author and do not necessarily reflect those of this website or its editors.