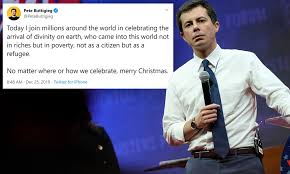 As reported in The Washington Post, his Christmas tweet read: "Today I join millions around the world celebrating the arrival of divinity on earth, who came into this world not in riches but in poverty, not as a citizen but as a refugee. No matter where or how we celebrate, merry Christmas."

In response, many mostly white evangelicals went apoplectic. "Jesus was not poor," they countered. "And he certainly was not one of those despicable refugees. At his birth, his parents were simply obeying imperial law by returning to Joseph's town of origin. Bethlehem just happened to have all its rooms filled with similar obedient taxpayers. So even though Joseph and Mary were quite capable of paying their hotel bill, they had to accept an overnight stay in a smelly, rodent-infested stable. Which of us wouldn't do the same?"

The next day, when we discussed the controversy over breakfast, my daughter asked, "What's the big deal? Why do those people care so much?"

I answered, "It's because if Jesus was poor and a refugee from state violence, the whole anti-poor, anti-refugee program of the Republican Party is nullified at least from the standpoint of faith." It means for instance that:

Even more, as economist Michael Hudson points out in his monumental And Forgive Them Their Debts, Jesus' programmatic reference to the "year of the Lord's favor" points to the Jewish Jubilee Year. "Jubilee" was the biblically mandated period when all debts were to be forgiven and land returned to its original (mostly poor) owners. Hudson points out that such debt forgiveness was practiced throughout the ancient mid-east. It was more general than a biblical mandate.

According to Hudson, when new leaders acceded to the throne, they created a clean slate. All debts were forgiven. The corresponding legislation in the Book of Deuteronomy had Israel following suit.

Jesus' "Good News" to the poor was that (following Deuteronomy) their debts needed forgiveness. Inevitably, that demand was understood by all concerned (especially by Rome's imperialists and their puppet clients in Jerusalem's temple) as a highly threatening call to social justice. (Can you see how that understanding of Jesus' Good News Gospel would be similarly threatening to Republicans while at the same time encouraging Democrats seeking relief for debt -crushed students?)

As I told my daughter, that's why it's important to evangelical Trumpists that Jesus not be a poor man himself, that he not be an advocate for the poor, or that he not be a refugee. The contrary calls everything Republicans stand for into question. It makes Donald Trump, his exclusion of refugees, and his baby jails eerily similar to King Herod as depicted in today's final reading.

But everything I've said so far overlooks an even deeper point that I developed in my Christmas reflections last Wednesday. My point there was that the "infancy narratives" (found only in Luke and Matthew) constitute what biblical scholars for the last century and more have recognized as Midrash and Haggadah. That is, following rabbinic tradition, these accounts represent fictional stories based on re-readings of the Jewish Testament and intended to make a theological point.

And in the case of Herod's slaughter of the innocents and the Holy Family's seeking refugee status in Egypt, Matthew's theological point for his specifically Jewish audience (vs. Luke's gentile readers) is that Jesus is the New Israel. As such, he relives his people's early history. [And that entire history from its very beginning (and repeated in its occupation of Palestine in 1948) is that of a refugee people - refugees from Pharaoh's enslavement to Hitler's genocide and ubiquitous anti-Semitism.] We might even say that the Jewish Testament's very message (reiterated in the case of Jesus) is that REFUGEES ARE GOD'S CHOSEN PEOPLE.

Put otherwise, the story of the Holy Family's "Flight into Egypt" is far more than a rabbinic riff on Moses's escape from the slaughter of Hebrew children under the Egyptian pharaoh 1200 years earlier. It actually has Jesus:

Related Topic(s): Debt; Evangelical; Faith; God; Immigrants; Jesus; Moses; Poverty; Refugees; Republican Hypocrisy; (more...) Republican Party; Republican Propaganda, Add Tags  (less...)
Add to My Group(s)
Go To Commenting
The views expressed herein are the sole responsibility of the author and do not necessarily reflect those of this website or its editors.