Anything to distract from the big picture: Putin's attack on the US and Trump-Russia contacts. 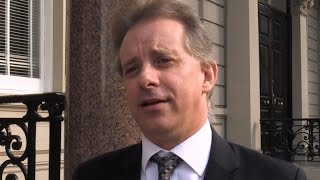 Christopher Steele is not the issue. Yet the former British intelligence official who wrote a series of unconfirmed reports on Trump-Russia connections during the 2016 campaign seems to have become the main target of congressional Republicans. On Friday, two Republican senators -- Charles Grassley of Iowa and Lindsey Graham of South Carolina -- released a letter they had sent the previous day to the Justice Department and the FBI requesting a criminal investigation of Steele. There have been no other known congressional criminal referrals related to the Russian attack on the 2016 presidential election or to interactions between Trump associates and Russians during the campaign.

In recent weeks, Capitol Hill Republicans have intensified both their attack on special counsel Robert Mueller's Trump-Russia investigation and their call for a quick end to the congressional inquiries. And with this move, Grassley and Graham are trying to bolster the Republicans' Trump-saving counter-narrative: the real scandal is the Steele dossier.

Pause for a moment and ponder this. The US intelligence community has concluded that Vladimir Putin ordered a clandestine act of information warfare against the United States to harm Hillary Clinton and help Donald Trump during the election. And during that race, Trump's camp had a series of contacts with Russians or suspected cut-outs. Also throughout the time Putin's operation was underway, Trump and his lieutenants kept denying this assault was happening -- even after his top campaign aides were informed that Moscow wanted to secretly assist Trump and after Trump was briefed by US intelligence agencies that Russia was behind the hack-and-dump assaults targeting Clinton and the Democrats. That is, the public now knows that the United States was attacked by Putin, that Trump associates were interacting with Russians during this period, and that Trump and his crew, intentionally or not, provided cover for Moscow by insisting no such operation was occurring.

Yet what now draws the ire of congressional Republicans the most is Steele and his reports.

David Corn is  Mother Jones ' Washington bureau chief. For more of his stories,  click here . He's also  on  Twitter  and  Facebook .  RSS  |  TWITTER  David is (more...)
Related Topic(s): Christopher Steele; Investigation; Republican; Senator Charles Grassley; Senator Lindsey Graham; Steele Dossier; Vladimir Putin, Add Tags
Add to My Group(s)
Go To Commenting
The views expressed herein are the sole responsibility of the author and do not necessarily reflect those of this website or its editors.