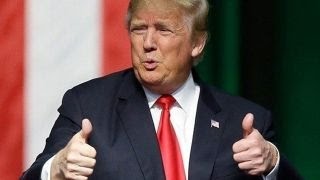 The Republican National Convention voted Tuesday evening to make billionaire real estate investor Donald Trump its presidential candidate after a roll-call vote staged to allow the candidate's son, Donald Trump Jr., to announce the vote of the New York state delegation, putting his father over the 1,237 votes required for the nomination.

The final tally was 1,725 for Trump, 484 for Texas Senator Ted Cruz, 125 for Ohio Governor John Kasich, 123 for Florida Senator Marco Rubio and a scattering of votes for other candidates. The 753 votes for candidates other than Trump was the largest number in opposition to a Republican nominee since the 1976 convention contested between Gerald Ford and Ronald Reagan.

The comparatively large number of votes for other candidates suggests a degree of ambivalence even in this ultra-right-wing audience over the implications of delivering the presidential nomination to the real estate and casino mogul. But the decision was made and it has enormous historical significance.

For the first time, one of the two major capitalist parties in America has chosen as its presidential nominee an individual of openly authoritarian and semi-fascist views who has publicly called for actions by the US government that are brazenly unconstitutional and illegal.

Among Trump's more notorious proposals are the mass round-up and expulsion of 11 million undocumented immigrants; a ban on Muslims entering the United States; an official policy of torture, including waterboarding "and much worse," against prisoners captured by the US military; and the extermination of the families of those designated as "terrorists" by the US government.

The staging and atmosphere of the convention are aimed at promoting a cult of Trump as the billionaire savior who will "Make American Great Again" by the sheer force of his own personality and will. The convention is in large measure given over to the Trump family, with each of his adult children making speeches along with his current wife Melania, who spoke Monday praising her husband in terms heavily plagiarized from a similar speech given by Michelle Obama to the Democratic National Convention in 2008.

Perhaps most remarkable was the speech delivered by the billionaire's oldest son, Donald Trump Jr., on Tuesday night. He turned out to be not only a polished speaker, but an advocate of extreme free market policies, including the destruction of public education.

The younger Trump declared that what will "Make America Great Again" will be the mere fact of his father's election and entry into the White House. In other words, it is not that Trump will improve the conditions of life for the American people, but that the American people will make themselves great by electing Trump. There is more than a whiff here of Josef Goebbels declaring that the Fuhrer is everything and everything is for the Fuhrer.

The authoritarian trend was further demonstrated in the focus of speaker after speaker on denouncing Trump's Democratic opponent, former secretary of state Hillary Clinton, not merely as a rival to be defeated on November 8, but as someone who should be put in jail as one of the first acts of a Trump administration.

This is not merely a matter of rhetorical overkill. It is the plain meaning of diatribes such as that delivered by former New York City mayor Rudy Giuliani on Monday night and the speech by New Jersey Governor Chris Christie on Tuesday night.

Christie presented a series of accusations against Clinton's tenure as secretary of state, citing events in Libya, Nigeria, China, Syria, Russia, Iran and Cuba, as well as Clinton's use of a private email server, and each time asking the audience to shout "guilty" or "not guilty." This performance was greeted with rising applause as well as swelling chants of "lock her up, lock her up."

Perhaps the low point in this whipping up of right-wing hysteria came when Ben Carson, the retired neurosurgeon who was one of the myriad candidates defeated by Trump in the primaries, suggested that Clinton was in league with the devil, tracing a connection to Lucifer through the personage of the community organizer Saul Alinsky, a social-democrat (and Jew) who died in 1972.

What is being put on display at the convention in Cleveland is the transformation of one of the two main capitalist parties in the United States into an ultra-right political formation that regards its traditional bourgeois opponents in the Democratic Party not as electoral rivals, but as illegitimate and subversive enemies.

This is the outcome of a protracted process, going back to the right-wing campaign to overthrow an elected president that led to the 1998 impeachment of Bill Clinton, followed by the stolen election of 2000, and now the nomination of a fascistic candidate who declares that his principal electoral opponent should be disqualified from running or jailed.

Patrick Martin writes for the World Socialist Website (wsws.org), a forum for socialist ideas & analysis & published by the International Committee of the Fourth International (ICFI).
Related Topic(s): Donald Trump; Nomination; Republican Convention; Trump Campaign, Add Tags
Add to My Group(s)
Go To Commenting
The views expressed herein are the sole responsibility of the author and do not necessarily reflect those of this website or its editors.