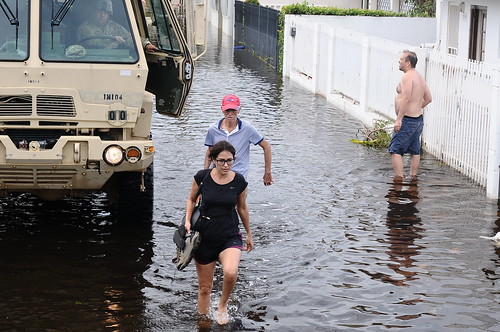 Puerto Rico Hurricane Flooding
(Image by The National Guard)   Details   DMCA
The crisis in Puerto Rico, far worse than that of Katrina in Louisiana, with a Trump White House response even more incompetent than that of the Bush White house response, reveals an entire Republican party without a soul. It cannot be a coincidence that the Trump Administration, from the president down to the pseudo Christians and Pseudo Jews in his cabinet and to the ghastly hypocrites in his cowardly House and Senate do not seem to care about an entire U.S. territory because it is populated by millions of "second class" Hispanics. Nor can it be a coincidence that these same people seem to have no feelings for the poor, the sick, the middle class, workers, our environment, our parks, or a free press.

Defending a bigoted monster, an authoritarian egomaniac, unread and totally without a moral compass is no longer an acceptable option for any accountable human being. Blaming every corrupt action on "fake news" reports? This too is no longer an option. Hillary, unfortunately misspoke, calling Trump supporters "deplorables." Calling ignorant voters "deplorable" is an unfair accusation. Ignorance, however is curable, stupidity is not! Meanwhile, being proud of ignorance and blaming every problem on the weakest and most vulnerable of society is the self serving hallmark of every despotic ruling class in the history of mankind.

As for protests against the inequities of race and ethnic cleansing, against the very mantra of the Trump base, they are sincere examples of freedom of expression, as are the marches of the alt- right whether we agree with them or not.

It is truly sad that Mr. Trump and his Satanic minions are so concerned about a piece of cloth and a song, yet have so little respect for millions of human lives and the tolerance that our flag and anthem actually represent. Taking a knee and holding one's hand over one's heart is hardly disrespectful to the flag or the anthem- it is the same gesture accorded to a fallen soldier. Carrying AK 47's in a "peaceful" march is in no way an honorable gesture, while blaming one's troubles on minorities and immigrants is the inevitable fate of truly inferior human beings.

Related Topic(s): Republican Hate; Republican Pandering; Republican Party; Republican Party Budget Cuts, Add Tags
Add to My Group(s)
Go To Commenting
The views expressed herein are the sole responsibility of the author and do not necessarily reflect those of this website or its editors.