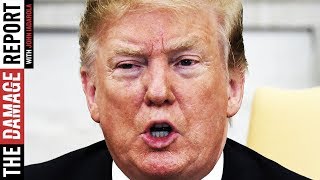 Trump is arguing that the cruel conditions they keep migrant children are perfectly fine.
(Image by YouTube, Channel: The Damage Report)   Details   DMCA

Thousands of people arrested by the US Border Patrol crossing the US-Mexico border are released from detention centers only to go directly to the emergency rooms of local hospitals, according to two damning press reports issued this past week.

The Atlantic magazine reported Sunday on what it termed "The Border Patrol-to-Emergency Room Pipeline," describing immigrants, frequently exhausted, dehydrated or otherwise weakened by crossing the border in remote desert areas, then thrown into detention centers where they can't wash their hands, even after using the bathroom, and are frequently denied clean drinking water and hot food.

A local pediatrician who visited a McAllen, Texas, detention center, Dolly Lucio Sevier, wrote a scathing report on the conditions there last month, calling them "tantamount to intentionally causing the spread of disease." This is a tactic that harks back to the genocidal treatment of Native Americans in the 18th century, when deadly diseases like smallpox were deliberately spread among them through the distribution of infected blankets.

According to the Atlantic, "Emergency-room doctors and nurses in the Rio Grande Valley, the busiest border region for migrant crossings, say they often see detained immigrants escorted into their offices by immigration agents. A physician's assistant ... said that in her regular 12-hour shifts she usually sees between five and 10 patients escorted by Border Patrol agents for issues such as medication refills, the flu, chicken pox, anxiety, pink eye, and bone fractures from jumping off the border wall.

A July 16 report in the non-profit Texas Tribune found, "Cases of severe dehydration and overexertion among migrants are skyrocketing in deep South Texas as people push their bodies past the breaking point to get into the United States, new statistics obtained by the Texas Tribune show."

The report, citing local Border Patrol chief Rodolfo Karisch, found that agents are taking 30 migrants per day to the emergency room just in the Rio Grande Valley Sector. Multiplied across the other sectors of the US-Mexico border, that would add up to thousands of migrants a month going from detention centers to emergency rooms.

Karisch has set aside an entire Border Patrol station, in Weslaco, to be used as an infirmary to quarantine patients with infectious diseases. The Tribune report cites one disease in particular:

"According to figures compiled by the U.S. Border Patrol's Rio Grande Valley Sector, which has the most apprehensions on the U.S.-Mexico border, authorities have already encountered 64 migrants with a rare and dangerous condition known as rhabdomyolysis so far in the 2019 fiscal year. That's double last year's total -- and there are still more than two months left in the period."

Rhabdomyolysis is a potentially life-threatening condition, in which overexertion and dehydration break down muscle tissue, releasing myoglobin into the bloodstream, which clogs the kidneys and can cause renal failure.

A nurse at a Rio Grande Valley hospital told the Tribune that migrants may be sick when they are detained, but they get worse because of being detained with other sick migrants in unsanitary conditions for a prolonged period. "They're arriving here sick, and they get sicker," she said.

"The nurse said young migrants going through the intake process had conditions that included diaper rash so bad that babies were bleeding, explosive diarrhea that oozes out of days-old diapers, chicken pox, antibiotic-resistant infections, multiple viral infections and at least one hungry baby who guzzled four bottles of formula."

These press accounts -- a rare exception in the American media -- give a glimpse of the brutal conditions deliberately created by the Trump administration in its effort to block the flow of desperate and cruelly oppressed people from Central America, fleeing police dictatorships and drug gangs and seeking sanctuary in the United States.

Patrick Martin writes for the World Socialist Website (wsws.org), a forum for socialist ideas & analysis & published by the International Committee of the Fourth International (ICFI).
Related Topic(s): Border Cruelty; Brutality; Immigrants; Trump Mental State; Trump Mexico Wall, Add Tags
Add to My Group(s)
Go To Commenting
The views expressed herein are the sole responsibility of the author and do not necessarily reflect those of this website or its editors.