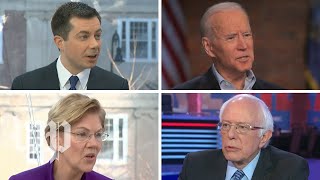 Manchester, NH I have been on the ground since yesterday (Sunday), two days prior to the NH Primary. This is my home state, so I know the territory. Today I went to Portsmouth, Salem, Derry, and Manchester and will be heading to Keene tonight and Durham tomorrow, always following the Sanders campaign.

While here in Manchester, I went to the Hilton and met some media celebrities, including Mika and Joe Scarborough of "Morning Joe." I encouraged them, saying that anytime I see them break out of the "controlled' viewpoint and explain the reality they're observing outside of the usual media narrative, I cheer for them. Mika took my text number. I have her ear.

I have been meeting with campaign surrogates and with the people who advise the volunteers. It seems that there is a battle for narrative right now. They have a crucial job: it is so important to have election integrity in NH after last week's disaster in Iowa.. Avoiding another disaster here depends on voters coming out and believing that their version of reality matters to their state and country. They have to believe that they come first.

Having observed election fraud first hand at many levels, I look for places to insert the idea that this dialogue with voters matters and that it should be people who determine their fate, not the media or the powerful monied interests. (https://thiscantbehappening.net/how-to-combat-caucus-crap-in-2020/.)

I am concerned about how the messages are being controlled. I was in a hotel bar room where someone from MSNBC said they thought about 50% of people liked him. That view was loudly rejected by the patrons but it was nonetheless reported by MSNBC later that Bloomberg support was polling at 50/50 in that room. This was false! I was there and that was not the case. They were claiming also on air that Bernie was on the ropes and showed him polling only 2% above Pete. That is wrong too.

According the last credible New Hampshire Poll released yesterday, the spread was 31 to 21, a comfortable lead for Bernie, yet the media message going out is "Pete is killing it". These seem like mad efforts to script things against what the actual numbers are. It is bizarre to be here while that is happening. I hope NH voters can make their own minds up. I have never seen such clear message manipulation. It should be called out as campaign corruption (as we're doing here).

The head of the Democratic Party, Tom Perez, is calling for the Iowa State Democratic Party Chair to resign, although it was Perez and the DNC that forced him to use the bad app that screwed things up in Iowa. The blame is spread all over the place except where it belongs...

For the rest of this article by LAURIE DOBSON, a former 2016 Sanders campaign worker who ran in that role for a state rep position, and who is blogging from the early Sanders campaign this primary season for ThisCantBeHappening!, please go to: https://thiscantbehappening.net/4787-2/

Related Topic(s): Bernie Sanders Presidential Campaign; Democratic National Committee; Media Consolidation; Media Corruption; Media Distortion, Add Tags
Add to My Group(s)
Go To Commenting
The views expressed herein are the sole responsibility of the author and do not necessarily reflect those of this website or its editors.