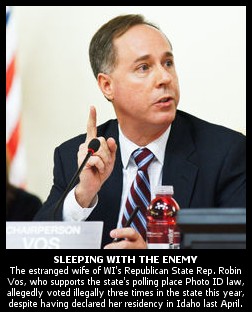 Another day, another allegation of voter fraud by Republicans. This one, courtesy of WKOW's 27 News in Madison, Wisconsin...

"The wife of a prominent state lawmaker cast a vote in Wisconsin's April presidential primary election, even though she was a resident of Idaho at the time.

"But records from Canyon County, Idaho show Samantha Vos swore under oath April 19 she was a resident of that state since early March. Vos' declaration came as she filed for legal separation from her husband.

"Records show Vos also voted in the June 5 gubernatorial recall election and the primary election earlier this month, as her legal action in Idaho continued."

Yes, it looks like, once again -- no matter what the professional GOP "voter fraud" fraudsters and clowns like John Fund, Hans von Spakovsky and Matthew Vadum claim -- if there is an epidemic of "voter fraud" in this country, it seems that it's not  Democrats, but Republicans, and often very very high-profle Republicans at that, who are carrying it out.

But wait! There is still more absurdity and/or irony and/or hypocrisy in this case...

According to PolitiScoop, Rep. Vos "has been a strong supporter" of Wisconsin Republican's polling place Photo ID restriction law, which has been found in violation of the state's Constitution in two different court cases by two different judges again and again and again.

(On Tuesday of this week, the state's Republican Attorney General asked the state Supreme Court for an expedited hearing on both cases, consolidating the two and skipping the Appeals Court entirely which had also previously rejected appeals from the AG. Prior to the law being struck down by the two different state courts, The BRAD BLOG's legal analyst, Ernie Canning, who had correctly predicted the case would be found unconstitutional, noted that its only hope for adoption would likely rest in the state's often-very-partisan Republican-majority Supreme Court.)

PolitiScoop goes on to note that Rep. Vos had attempted to intervene in the court cases on behalf of the Republican's voter suppression law, until ethics questions arose surrounding his attempt to do so, as WKOW explained in June:

"Vos...declined to comment on who is paying the attorneys. Vos' spokesperson Kit Beyer said Vos' attorneys are working with state officials on the situation."

But that's not all!

PolitiScoop also notes that Vos had been among those attempting to claim (without evidence) that there was fraud in the reported June 5th recall victory of Democrat John Lehman over incumbent Republican Van Wanggaard. In response to evidence-free claims of "fraud" by Republicans following the Democrat's slim margin of just under 800 votes over the Republican, as announced on Election Night, PolitiFact found Vos' claims to be "False."

In their fact-check, they noted:

"The idea that the election results were tainted was advanced most aggressively by state Rep. Robin Vos, R-Rochester, whose Assembly district is part of the 21st Senate District. He offered his views June 17, 2012 on WISN-TV (Channel 12) "Upfront with Mike Gousha."

Brad Friedman publishes Bradblog.com
Related Topic(s): Republican; Voter Disenfranchisement; Voter Fraud; Wisconsin, Add Tags
Add to My Group(s)
Go To Commenting
The views expressed herein are the sole responsibility of the author and do not necessarily reflect those of this website or its editors.