From In These Times

The unimaginable is now possible: 100 percent renewable energy. We can't settle for less. 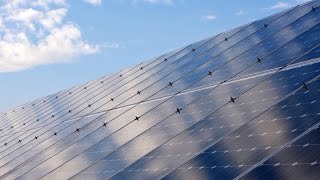 THE KNOCK ON ENVIRONMENTALISTS IS THAT THEY'VE BEEN BETTER AT OPPOSING THAN PROPOSING. Sure, being against overheating the planet or melting the ice caps should probably speak for itself -- but it doesn't give us a means. So it's important news that the environmental movement seems to be rallying round a new flag. That standard bears a number: 100 percent.

It's the call for the rapid conversion of energy systems around the country to 100 percent renewable power -- a call for running the United States (and the world) on sun, wind and water. What Medicare for All is to the healthcare debate, or Fight for $15 is to the battle against inequality, 100% Renewable is to the struggle for the planet's future. It's how progressives will think about energy going forward -- and though it started in northern Europe and Northern California, it's a call that's gaining traction outside the obvious green enclaves. In the last few months, cities as diverse as Atlanta and Salt Lake have taken the pledge.

No more half-measures. Barack Obama drove environmentalists crazy with his "all-of-the-above" energy policy, which treated sun and wind as two items on a menu that included coal, gas and oil. That is not good enough. Many scientists tell us that within a decade, at current rates, we'll likely have put enough carbon in the atmosphere to warm the Earth past the Paris climate targets. Renewables -- even the most rapid transition -- won't stop climate change, but getting off fossil fuel now might (there are no longer any guarantees) keep us from the level of damage that would shake civilization.

In any event, we no longer need to go slow: In the last few years, engineers have brought the price of renewables so low that, according to many experts, it would make economic sense to switch over even if fossil fuels weren't wrecking the Earth. That's why the appeal of 100% Renewable goes beyond the Left. If you pay a power bill, it's the common-sense path forward.

TO UNDERSTAND WHY IT TOOK A WHILE TO GET TO THIS POINT, CONSIDER THE SOLAR PANEL. We've had this clever device since Bell Labs produced the first model in 1954. Those panels lost 94 percent of the solar energy in conversion and were incredibly expensive to produce, which meant that they didn't find many uses on planet Earth. In space, however, they were essential. Buzz Aldrin deployed a solar panel on the moon not long after Apollo 11 touched down.

Improvements in efficiency and drops in price came slowly for the next few decades. (Ronald Reagan, you may recall, took down the solar panels Jimmy Carter had installed atop the White House.) But in 1998, with climate fears on the rise, a close election in Germany left the Social Democrats in need of an alliance with the Green Party. The resulting coalition government began moving the country toward renewable energy.

As German demand for solar panels and wind turbines grew, factories across China learned to make the panels ever more cheaply and the price of panels began to plummet, a freefall that continues to this day. Germany now has days where half its power is generated by the sun. In 2017, solar or wind power wins most competitive bids for electric supply: India just announced the closure of dozens of coal mines and the cancellation of plans for new coal-fired generating stations because the low cost of solar power was undercutting fossil fuel. Even in oil-rich Abu Dhabi, free power from the sun is impossible to resist, and massive arrays are going up amidst the oil fields.

One person who noticed the falling prices and improving technology early on was Mark Jacobson, director of Stanford University's Atmosphere and Energy Program. In 2009, his team published a series of plans showing how the United States could generate all its energy from the sun, the wind and the falling water that produces hydropower. Two years later, Jacobson and a crew of co-conspirators -- including actor Mark Ruffalo -- launched the Solutions Project to move the idea out of academic journals and into the real world. The group has since published detailed plans for most of the planet's countries. If you want to know how many acres of south-facing roof you can find in Alabama or how much wind blows across Zimbabwe, these are the folks to ask.

With each passing quarter, the 100 percent target is becoming less an aspirational goal and more the obvious solution. Hell, I spent the spring in some of the poorest parts of Africa where people -- for the daily price of enough kerosene to fill a single lamp -- were installing solar panels and powering up TVs, radios and LED bulbs. If you can do it in Germany and Ghana, you can do it in Grand Rapids and Gainesville.

Even 72 percent of Republicans want to "accelerate the development of clean energy." That explains why, for example, the Sierra Club is finding dramatic success with its #ReadyFor100 campaign, which lobbies cities to commit to 100 percent renewable. Sure, the usual suspects, such as Berkeley, Calif., were quick to sign on. But by early summer the U.S. Conference of Mayors had endorsed the drive, and leaders were popping up in unexpected places. Columbia, S.C., Mayor Steve Benjamin put it this way: "It's not merely an option now; it's imperative."

Environmental groups from the Climate Mobilization to Greenpeace to Food and Water Watch are backing the 100 percent target, differing mainly on how quickly we must achieve the transition, with answers ranging from one decade to around three. The right answer, given the state of the planet, is 25 years ago. The second best: as fast as is humanly possible. That means, at least in part, as fast as government can help make it happen. The market will make the transition naturally over time (free sunlight and wind is a hard proposition to beat), but time is the one thing we haven't got, so subsidies, hard targets and money to help spread the revolution to the poorest parts of the world are all crucial.

That's why it's so significant that Sen. Bernie Sanders (I-Vt.) joined with Sen. Jeff Merkley (D-Ore.) in April to propose the first federal 100 percent bill. It won't pass Congress this year -- but as a standard to shape the Democratic Party agenda in 2018 and 2020, it's critically important.

Congress, however, is not the only legislative body that matters in America. Earlier this year, for instance, the California State Senate passed -- by a 2-1 margin -- a bill that would take the world's sixth-largest economy to 100 percent renewable by 2045. Last month, Gov. Jerry Brown, in a bid to recreate the spirit of the Paris climate talks, invited the world's "sub-national" leaders -- governors, mayors, regional administrators -- to a San Francisco conference in September 2018.

Bill McKibben is the author of a dozen books, including The End of Nature and Deep Economy: The Wealth of Communities and the Durable Future. A former staff writer for The New Yorker, he writes regularly for Harper's, The Atlantic Monthly, and The (more...)
Related Topic(s): Corporations; Energy; Energy Solar; Energy Wind; Revolution; Solar, Add Tags
Add to My Group(s)
Go To Commenting
The views expressed herein are the sole responsibility of the author and do not necessarily reflect those of this website or its editors.